Shimano’s SPD and SPD-SL clipless pedals are a popular choice for bike riders across a range of disciplines.

They’ll hold your feet in contact with the pedals better than a flat pedal, providing a secure connection and potentially improving your pedalling efficiency.

But why are there two different systems for Shimano clipless pedals? And which one is likely to work better for the type of riding that you do? We’ll answer both questions in this article.

Shimano SPD and Shimano SPD-SL are both clipless pedal systems, which are broadly aimed at off-road and road cyclists respectively. Although the SPD acronym – Shimano Pedalling Dynamics – originated from Shimano, it has become a generic term for similar pedals from other manufacturers, in the way that ‘Hoover’ largely usurped ‘vacuum cleaner’. There’s a look at other similar pedals later on.

Before clipless pedals, cyclists looking for the efficiency of a solid connection to their bike would usually race using flat cage-type pedals, with a springy metal toe clip on the front and a strap to fasten their foot within it. Shoes could have a slot, which located on the raised rear of the cage, and getting in and out of toeclips was a fiddly process. In the event of a crash, feet often remained stuck in the pedals.

Clipless pedals improve on this with a specific cleat bolted on to the shoe’s sole, which locates on the pedal body, and is held firmly by a sprung mechanism. Nowadays, all of the best road bike pedals are clipless, and it’s in this category that you’ll find SPD-SL pedals. Likewise, most of the best gravel bike pedals are clipless too, but more often in the SPD format, but what are the differences? 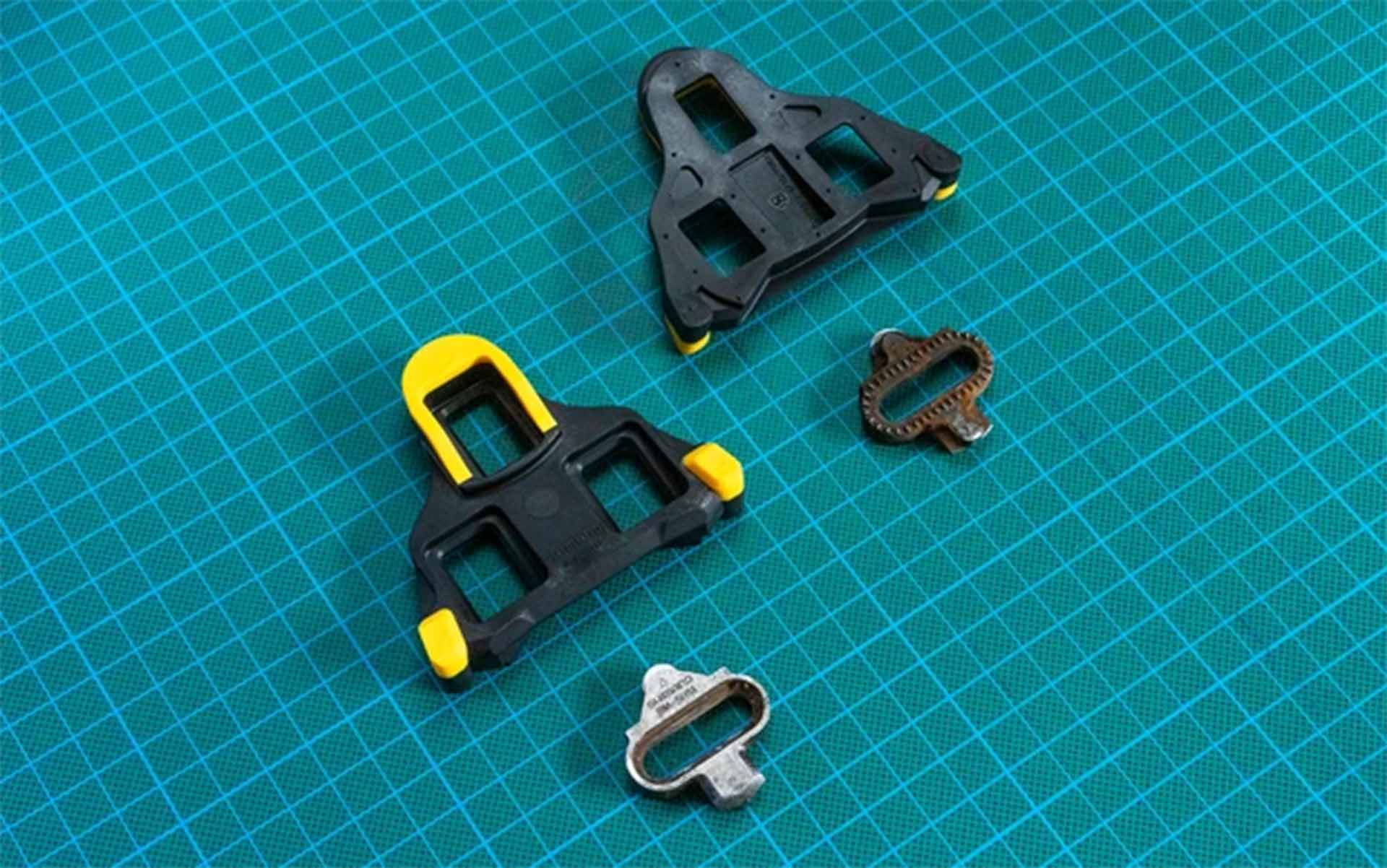 What’s the difference between SPD and SPD-SL clipless pedals?

SPD stands for Shimano Pedalling Dynamics, with the SL standing for SuperLight. That gives a clue as to the intended use of the systems.

SPD has become more-or-less a synonym for mountain bike pedals (and, more recently, pedals for gravel riding), while SPD-SL is mainly used for road cycling – that’s where the reduced weight comes in. But there are good reasons why you might choose to use SPD pedals on a drop-bar bike.

We’ll come on to the specific differences, and advantages and disadvantages, of the two systems.

SPD cleats (the part of the system which fixes to the bottom of your shoe and ‘clips in’ to the pedal) are made of metal and are smaller than SPD-SL cleats.

The design differences have other consequences – read on.

A bit of history clipless pedals

Shimano’s first clipless pedal, the Dura-Ace 7401, arrived in 1987, with a Look-compatible cleat licensed from the French company.

The SPD-R design followed but it wasn’t until the 2003 model year, and the launch of the 7750 Dura-Ace pedal developed with input from Lance Armstrong, that Shimano landed on the SPD-SL.

In the meantime, Shimano had developed the SPD design, based on a smaller metal cleat with two points of attachment to the shoe, and first released in 1990. This was a natural fit for mountain bike riders, but didn’t work so well for performance road use, where pedalling efficiency is paramount.

What are the benefits of SPD clipless pedals?

Possibly the greatest feature of SPD pedals is their double-sided design, which is identical on each side. This takes the guesswork out of engaging with the pedal, as it’ll always be available.

The rear of the pedal includes a release tension adjusting screw, which can be adjusted to increase or decrease the ease with which you’re able to twist your foot to disengage. New users, or commuters, might want to set a lower tension than experienced racers, for example, to build confidence and allow easier disengagement.

It’s common for cleats to include ‘float’, which is the lateral amount of movement a heel can make through pivoting at the cleat, without the cleat unclipping from the pedal. This allows your foot to find its most natural position relative to the pedal throughout each pedal revolution, hopefully fending off potential knee issues.

However, of course, it’s important to align the cleats as well as possible when fitting them to your shoe, to benefit from maximum efficiency and comfort.

The small, crucifix-style cleats of SPD pedals are (apart from a short-lived two-bolt road SPD pedal) intended to be used on a shoe with a walkable sole. This usually has grippy rubber tread all over, and a generous cut-out section around the cleat mount. When the cleat is installed, it is recessed within the sole, allowing you to walk normally, without fear of slipping.

This not only makes walking a realistic and safe option, but also protects the cleat from unnecessary damage. It’s superbly useful for commuters, and leisure cyclists, who almost always need to incorporate walking into their journey, and it makes any stops a simpler experience. What’s more, SPD cleats are metal and are generally very durable, although very heavy use will see them wear faster.

Because weather isn’t always dry, SPD pedals are designed to cope with mud and whatever nature puts in our way. Mud usually collects around the recessed cleats when you put a foot down, and that can make getting the cleat back into the pedal difficult. But SPD pedals are designed with space around and between most elements, so that mud is pushed through, allowing the cleat to engage.

This practicality makes SPD pedals ideal for mountain bikes, cyclo-cross bikes and gravel bikes, but also for winter road cycling, when slippery conditions underfoot and the likelihood of regular stops means that grippy footwear is welcome.

Their compact size ensures that a typical SPD pedal doesn’t collect too much mud, and is less likely to affect ground clearance when cornering or turning. But some riders prefer a larger, grippy platform around the SPD mechanism, so it’s possible to use it effectively when clipped in or not. This can be especially useful in MTB gravity disciplines, commuting and leisure cycling.

What are the benefits of SPD-SL clipless pedals? 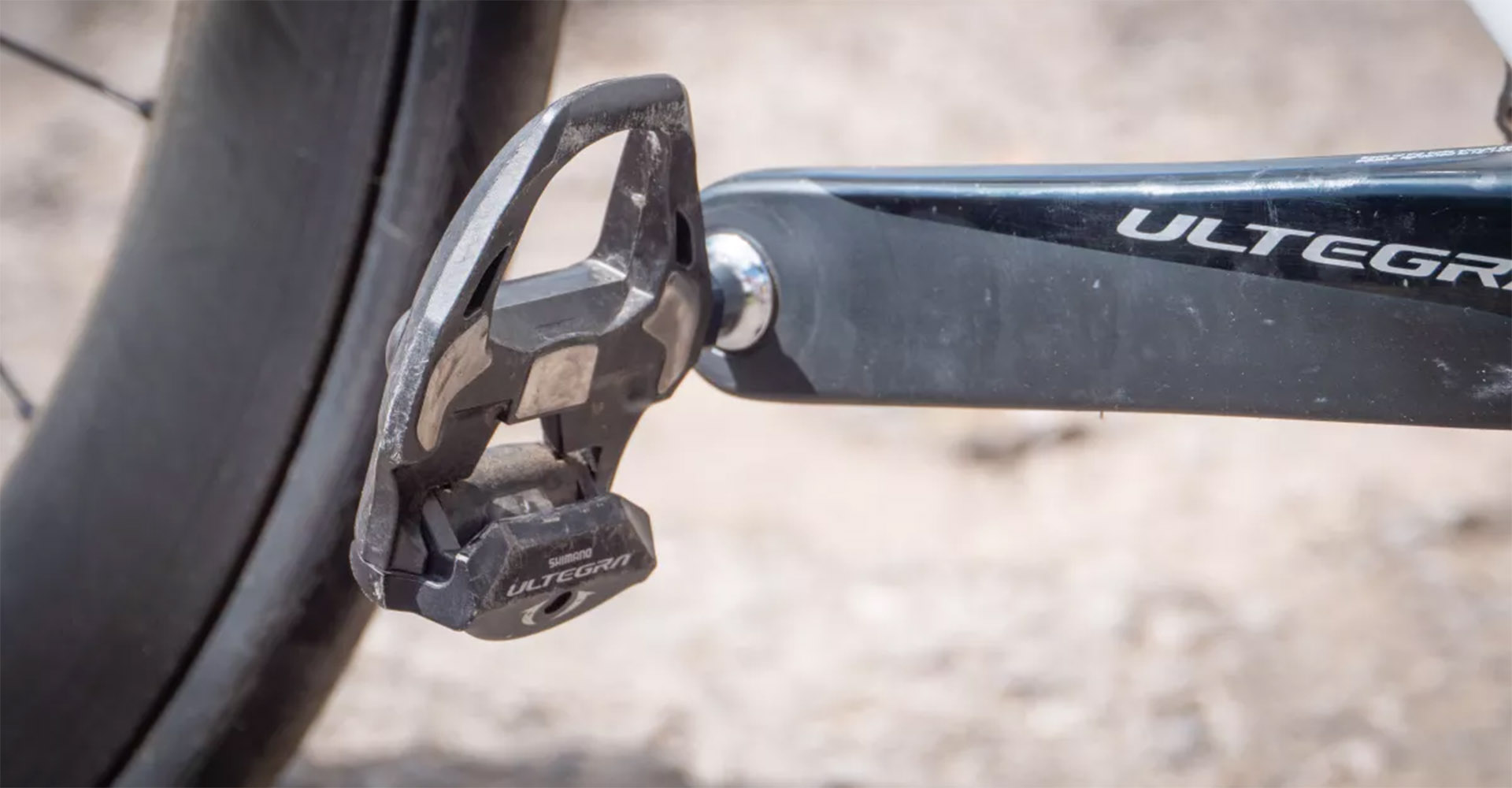 The SPD-SL format is all about low weight and power delivery.

With a wider pedal body and the significantly larger interface between the pedal and the cleat on your shoe, the foot is held more firmly in place and there’s a much bigger platform – ideal when sprinting.

The design uses a large plastic cleat, with the three bolts on the underside of the shoe widely spaced, for a secure attachment to the shoe.


The large cleat makes walking in your shoes awkward though. You end up waddling and if a surface is wet, you can easily slip. Plus shoes for road cycling have no grip on the soles, except a small pad at the toe and heel to reduce wear.

The cleats tend to wear more quickly than SPD ones too, and need more regular replacement, although again they are not expensive.

If you do walk in any mud, the deeper binding surfaces on SPD-SL pedals tend to get clogged up and your cleats can fail to engage properly with the pedals.

So SPD-SL pedal systems are designed for the rider who wants to cover long distances on the road and doesn’t expect to need to put a foot down or walk too much.

SPD-SL pedals are single sided. They naturally rest pointing obliquely downwards, so clipping in is more of an art than with SPD pedals, involving flipping the pedals over as you start to ride and accurately engaging the cleat with the pedal’s top surface.

It’s something that requires practice to get right, but once mastered becomes second-nature.

Some riders find disengagement with SPD-SL cleats slightly harder than with SPD pedals, but tension can be adjusted to suit. Beginners and commuters are also likely to prefer the double-sided design of SPD pedals, particularly when navigating busy junctions and road traffic.

Otherwise, another advantage of SPD-SL pedals for the road rider is their lighter weight – typically between 50g and 100g a pair less than SPD pedals at a similar price. Top-end SPD-SL pedals have carbon fibre bodies.