How cool is it to ride in the snow

Probably the most miserable winter cycling conditions is horizontal rain. You know, the kind blown in 30mph winds, at temperatures just above freezing. Once it gets cold enough to snow it is much more pleasant on the roads. Then road conditions continue to improve the colder it gets. This is because cars will generally clean the roadway of snow and ice by action of their tires, and the snow is too cold to melt and re-freeze as ice. As a result your have bone dry pavement.
At or around freezing weird things can happen. The slushy snow can be melting almost as fast as it hits the ground, but can still collect on your chain and get carried into your rear gear cluster and freeze there.

The best you can do in this situation (other than stopping and cleaning it every half mile) is to get in the big chain ring and a fairly big cog in back, thereby putting the chain under as much tension as possible. Then stay in this gear pedaling with great force on every third or fifth stroke. 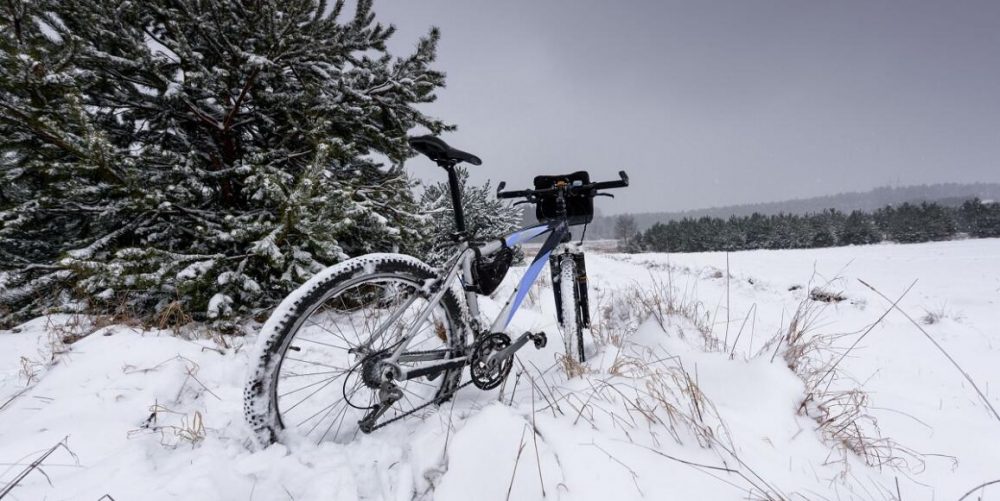 This puts the ice building up on the cogs under tremendous pressure, which lowers the melting point, which keeps that gear (and only that one) free of ice till you can limp along to the end of your journey.
Beginning 5 to 10 degrees below freezing, you really have to start watching the wind chill. Above that you are giving off enough heat to not have to worry about it much. This is when you want to consider a balaclava or face mask.
Don’t forget to fill in the neck opening at the top of your jacket. (Again a balaclava is great for this). By this time you better have already gotten out of those race-oriented cycle shoes and into a winter boot or light weight hiking boot or your toes will start to freeze in under 30 minutes.

From about +20F to about -20F is perfect icebiking weather. Never any slush, not much deep new snow to deal with, the only bad part is the wind. After -20F, you have to start wearing a lot of movement inhibiting clothes. However, I never notice much difference from -20F down to -40, because by the time it is that cold you are usually dressed for it, and you can compensate for the temperature by working a little harder.

If you have a breakdown or a flat at these temperatures, you can be in trouble. Hypothermia can set in, since you are already sweaty from working and if you have to sit for any length of time you will chill quickly.
Luckily, flats are rare at these temps, because the snow plows seem to remove most of the broken bottles and nails etc. that you find in summer. This is where it pays to carry a spare tube, because you don’t want to fiddle with finicky patches when it is that cold.
Weird valve problem can happen if you ride through water at really cold temps. There have been more than one report on the icebike mailing list and on rec.bicycles.tech news-group about Schrader valves opening (perhaps due to expansion of freezing water in the top of the valve stem), and the tire going flat almost instantly, but upon inspection, no visible damage to either tire or valve. Simply re-inflate and it works fine. Avoid the puddles. 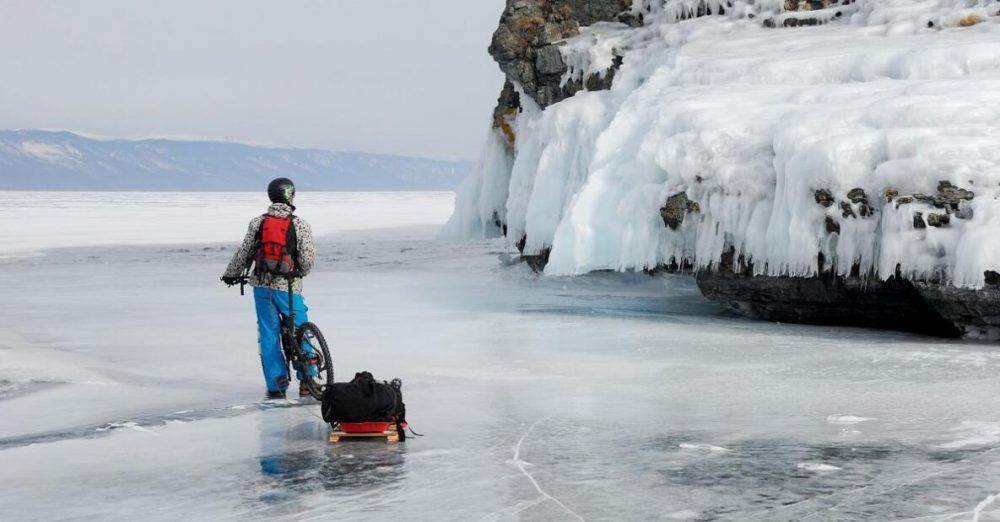 How often on ice?

So you have convinced yourself that you want to try winter commuting by icebike, but would like to know what you are up against?
Just how often will you be riding in winter conditions, with snow and ice to contend with in addition to the usual problems of cycle-commuters? Motorists are convinced that every day from the first fallen leaf till the tulips bloom is one endless arctic nightmare. Windshields need to be scraped, cars won’t start, every snow storm snarls traffic. Ride a Bike!?! Are you nuts?
Until you are out there every day, or you go digging through a mountain of statistics, you may have nothing but horror stories to go on when planning your winter commuting.
Luckily, some icebikers are the driven type who keep bike logs. One such cyclist is Bob VonMoss who bike commutes year round in Chicago.
Bob kept logs of his winter of 98/99 icebike commutes to get a handle on just how often he was really icebiking.
“Last Fall I started keeping track of the icebike days to or from work to get an idea of how much icebiking there really is around here.
I colored in the days on a calendar and wrote the lowest temperature during the ride, based on weather service temps on their web page.
“An icebiking day is defined here as a day when the temp is at or below 32F/0C.”
The low temps are not the weather service low temps for the day, just the low temp *during* the ride to or from work.
Also days off or holidays aren’t counted, nor are Saturdays.”
Bob VonMoss
Here’s what Bobs logs show:

If you plot the number number of commutes and the average commute temperatures you can see that most icebike commutes occurred in January, even though Decembers rides averaged slightly colder. The coldest ride was minus 12, in January.
The average low temp on the commute days was 20.8 F for the entire winter. (Remember, this sample only includes true icebike days. Days above freezing were not included).
In Mid-continental North America, if you bike commute on about 22 days a month, you can expect to ride in below freezing weather about half of the time in the dead of winter.
You can plan on temperatures 15 degrees (F) below freezing as an average. If you planned to “wimp out”, January would be the month to do it, but even January is not that bad.
You will probably find that if you make it through December you will realize that it’s not as bad as you thought. Stick with it day by day, perhaps skipping only the brutally cold or windy days. Once you stop, its hard to get motivated to start again.
While it’s not often really miserably cold at these latitudes, there are still plenty of ice days. Knowing that half your rides for three months are likely to be icy can help you justify that set of studded tires or winter tights.
The better you deal with the temperatures and the ice, the more enjoyable the ride and the less likelihood there is that you will wimp out. After all, had Bob whimped out, we wouldn’t have these nifty stats to present to you. 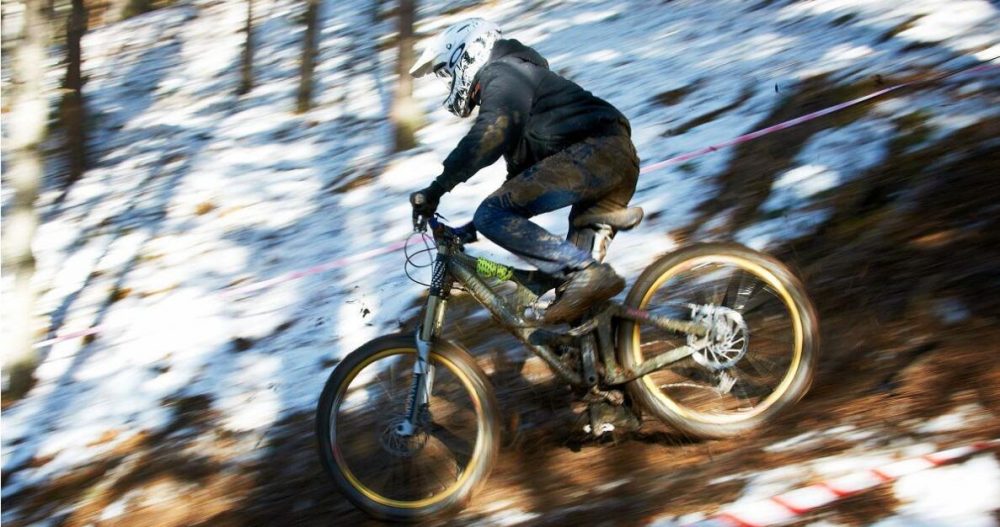 How Risky Is It?

How risky is icebiking? Are you taking your life in your hands when you venture on the icy road?
While it can’t be said that icebikers are never injured, it would seem that as a means of transportation or recreation winter cycling is no more risky than cycling in general. In fact, it may be safer.Yes, bikes are slower, and therefore you are exposed to the risk for a longer period.

But bikes are not always that much slower over the distance bikes are used. Obviously bikes are not used for routine commuting for distances much beyond 30 miles. Time is the limiting factor as to what vehicle is chosen for most commutes. Therefore time is the logical unit of comparison, not distance.

Considering that the average passenger car travels at 17 mph over the life of the vehicle, you can assume that at least as many hours are spent in the car as on the bike.

Most people will devote no more than half an hour, maybe 45 minutes to commuting (each way). Some more, but many more spend far less time in daily transit. The same is true of cyclists. Once the trip starts taking more than half an hour each way, the number of participants falls off dramatically. Commuter cyclists and motorists tend to spend about the same amount of time per day in/on the vehicle.

How slippery is it?

Folks new to winter cycling often are amazed that anyone can remain upright on a bike on snow and ice.
After you have been on the bike for a few days, you come to realize that the situation is quite manageable. Snow, while certainly more slippery than bare pavement, is somewhat like a shallow covering of sand, which requires somewhat more gradual turns, but otherwise is not particularly slippery.
Ice on the other hand presents a totally different situation. Lots of winter cyclists end up with a death grip on the handlebar worrying about every little steering movement. After a while you get use to the amount of slip and slide movement that the bike exhibits, and learn to “dance with the bike”, controlling those small slips and learning to avoid the big ones. Then you get overconfident, and crash.

Tags：cycling conditions
Share:
Prev： How to take care of an electric bike
Next： Comprehensive guide to the electric scooter laws