How Do Electric Bike Shifters Work

Everything you need to know about electronic gear-shifting system

The first-ever bicycle that existed can be traced back to 1817. Thanks to a German baron named Karl von Drais who made a huge development in the field of transportation when he created a steerable, two-wheeled device. The prototype that he created didn’t include a chain, brakes or pedals. Instead, riders propelled this so-called device forward by manually pushing off from the ground with their own feet. Today, not only chain, brakes, and pedals comprise the most common type of bicycles but a whole lot more.

Through the years, the evolution of bikes became more and more exciting whether or not you’re a bike enthusiast. From being the traditional hard-to-pedal bike to an awesome pedal-assisted electric bike, and with its becoming wider reach and market, you can say that the bike industry is having the time of its life. Modern bicycles are now equipped with the latest technology such as GPS tracker,  electric motor, and battery, particularly for electric bikes, and maybe the most significant leap of development from what Karl von Drais’ invention – the gear-shifting system.

What is a gear-shifting system?

Fundamentally speaking, a gear-shifting system is a mechanism (can be mechanical or electronic) that allows you to shift the gears on your bike to a level of your liking. When you’re choosing a gear, you’re basically choosing the level of effort you want to exert on each pedal you make. The bike itself and its gears (gearing system as they call it) allow you to go through uphill, downhill, and on flat roads in the most efficient way possible. It is important to note the difference between the two systems. The gearing system refers only to the bike’s gears, while the gear-shifting system is the method of changing from one gear ratio to another. 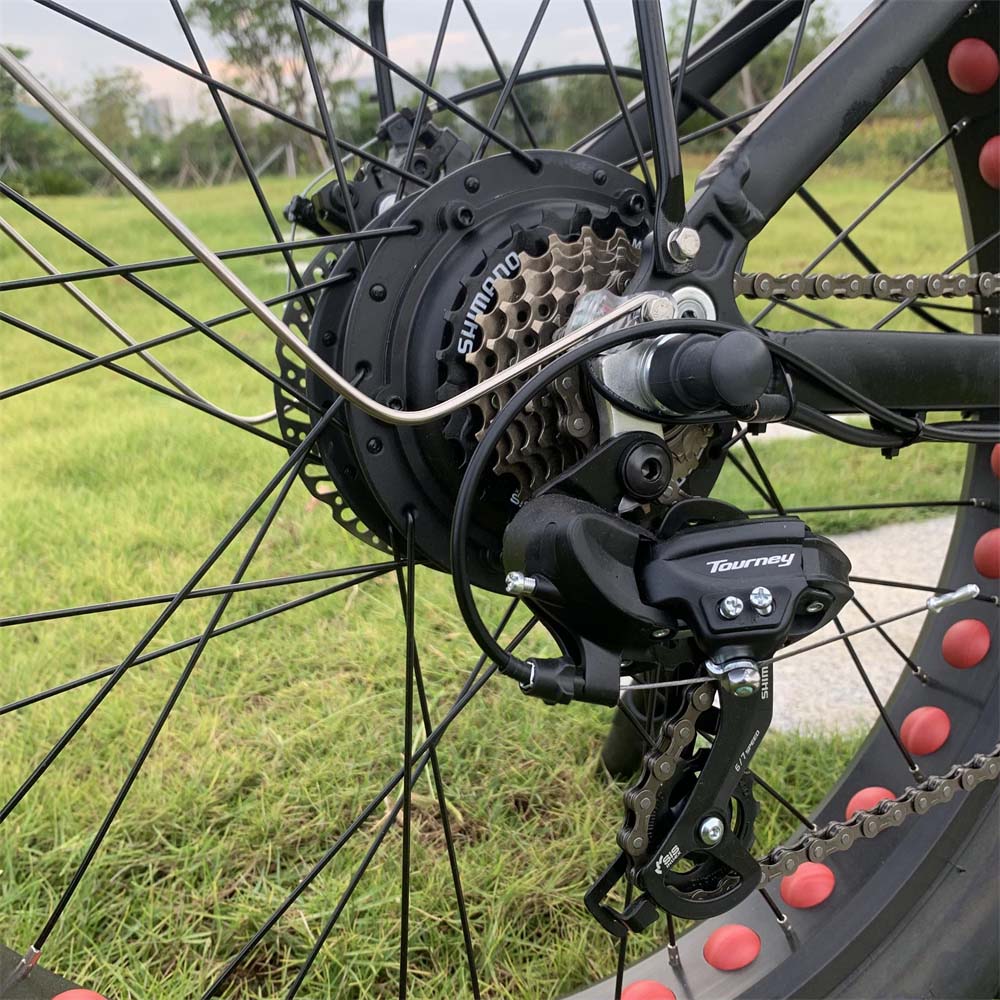 But the question is, how exactly do you shift from one gear to another? The answer is, it depends on the bike you own. There are so far two different kinds of gear-shifting mechanisms: mechanical and electronic shifting. For the former, traditionally, you can shift gears from one to another by operating conventional control levers that pull and release Bowden cables, which then transmit mechanical force or energy to the spring-loaded derailleurs that adjust in accordance to the transmitted mechanical signal. These derailleurs literally derail the chain as they guide it from one sprocket to the other resulting in a change in gear ratio. This mechanism of changing gears is the most commonly implemented gear-shifting system in almost all the bikes you see today. However, there are quite several disadvantages to using it. These then pushed many bike companies to discuss and further develop this traditional mechanism. Hence, the birth of an electronic gear-shifting system.

During the 90s, many bike companies such as SunTour, Mavic, and Sachs started experimenting and tried entering the electronic world with their own versions of electronically controlled gear shift mechanism, but only during the 2000s, that the famous Japanese cycling components manufacturer, Shimano introduced the Di2 (Digital Integrated Intelligence), a set of trekking components that included electronic shifting. It was 2009 when Shimano once again launched their very own Di2 meant for road bicycles, which became the first commercially successful electronic gear-shifting system.

Instead of having to use conventional control levers and mechanical cables while biking, the Shimano Di2 electronic gear-shifting system allows you to shift gears through electronic switches. These switches are either located in the bikes’ handlebars or integrated in its shift lever. They are also responsible for sending signals to a battery pack through its connected wires. The Shimano Di2 system comes with a rechargeable lithium-ion battery pack that supplies power to the derailleur motors and is estimated to last up to six months, depending on how often you use your bike. But don’t worry for the system also has an LED that lights up when it needs a charge.

Believe it or not, Shimano’s Di2 systems are entirely customizable. You can make whatever button do what you want them to do, and it can all be modified using Shimano’s E-Tube software. And just recently, Shimano released the E-TUBE PROJECT, an application that is compatible with your Windows PC, Apple or Android tablet and smartphones. It allows you to change settings, run diagnostics, and upgrade the firmware. Essentially, the application or software connects the groupset to an electronic device, a laptop computer for example, wherein you can choose how fast you want the gears to shift with the five different settings (Very Slow, Slow, Normal, Fast, and Very Fast) given in the software. You can also choose exactly what the levers do. Compared to mechanical shifting, an electronic gear-shifting system requires less maintenance, provides more convenience, and allows you to do more than just gear shifting. But everything comes with a price, that is why the electronic gear-shifting system is generally way more expensive than the conventional mechanical gear-shifting.

Shifting Gears in an electric bike

Not all bikes have gear-shifting mechanisms included in their build; some have only one cog or sprocket wherein changing gears is not possible. Nevertheless, the number of bikes being used in the world right now with or without a gear-shifting system is spiking up. Not only because they are eco-friendly modes of transportation, but they also give you the right amount of physical exercise and happiness. But what better way to enjoy all these things without sweating a lot and getting too exhausted than with the use of an electric bike.

In most electric bikes, an electric assistance level can correspond to multiple mechanical gears. Take for example, the featured electric bike below has a Shimano Push-button 7 Speed shifter. Knowing that Shimano has four electric assistance levels, and each level corresponds to seven different mechanical gears, this will give you a total of 28 speed combinations! In this essence, electric bikes offer you a more comprehensive range of speed combinations than a regular bike resulting in a more comfortable and efficient biking experience.

Compared to the mechanical gear-shifting mechanism that makes use of conventional control levers and cables, the electronic gear-shifting system in any given bike for that matter makes use of electronic switches that transmit signals to a Lithium-ion battery pack through connected wires. It also provides you the freedom to customize what your buttons or levers can do and allows you to modify more settings using the E-TUBE PROJECT application of Shimano.

Looking back at how bike’s gear-shifting systems evolved through time, you’ll be amazed at how much joy and convenience it brought to all the bike users out there. Not only did it change the face of the bike industry, but it also contributed to the growth and development in the field of transportation.

Understanding how electric bike shifters work can’t be that hard, right? Have any questions? Leave us a comment below!