The humble origins of 1817 have come a long way, and now they are truly innovative and impressive machines. But did you know that there are different types of Ebike, all with specific uses? Below, I’ll open the door to the far-reaching world of cycling, including some of the most unusual types you’ll ever see.

First, I’ll cover the mainstream bikes that most people are familiar with. Then I’ll move on to some of the coolest pro bikes out there. By the end of this article, you will be well versed in the world of cycling and what makes cycling so appealing to riders. 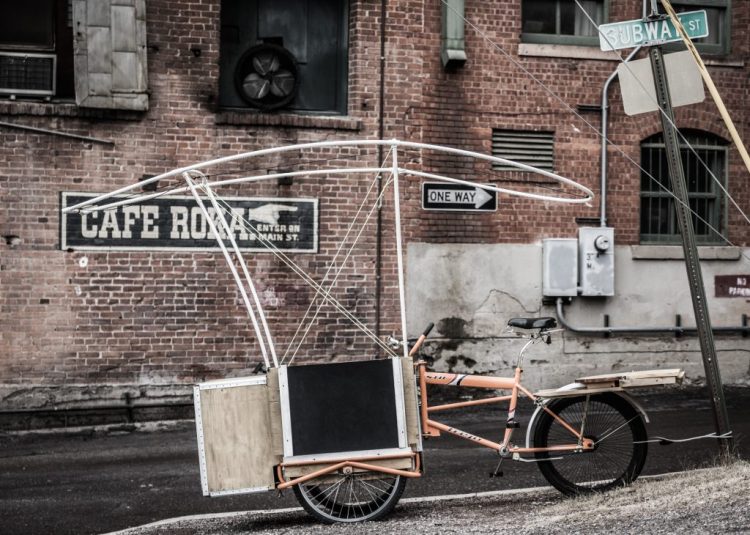 Almost everyone knows what a bicycle is, but most people don’t realize how complex and intricate their designs are. Mainstream bikes are popular for their performance, versatility and ease of use. They’re also generally more affordable than special and unusual styles, so we see them more often.

A note before we get into the list: While I’ll mention specific parts for each style, it’s important to note that all bikes can be modified to suit your specific needs and aesthetics. However, doing so can affect the performance of the bike, so proceed with caution.

The main types of bicycles are:

Mountain bikes are sometimes called “all-terrain bikes” because they can go over almost any surface. They are designed for off-road adventures and rough terrain. They have a solid frame and wheels and a solid suspension system to keep the rider safe and stable.

Their handlebars are usually flat or upright to keep you in the right position on rough terrain. Mountain bikes also have an extremely low gear range for uphill and difficult terrain pedaling. 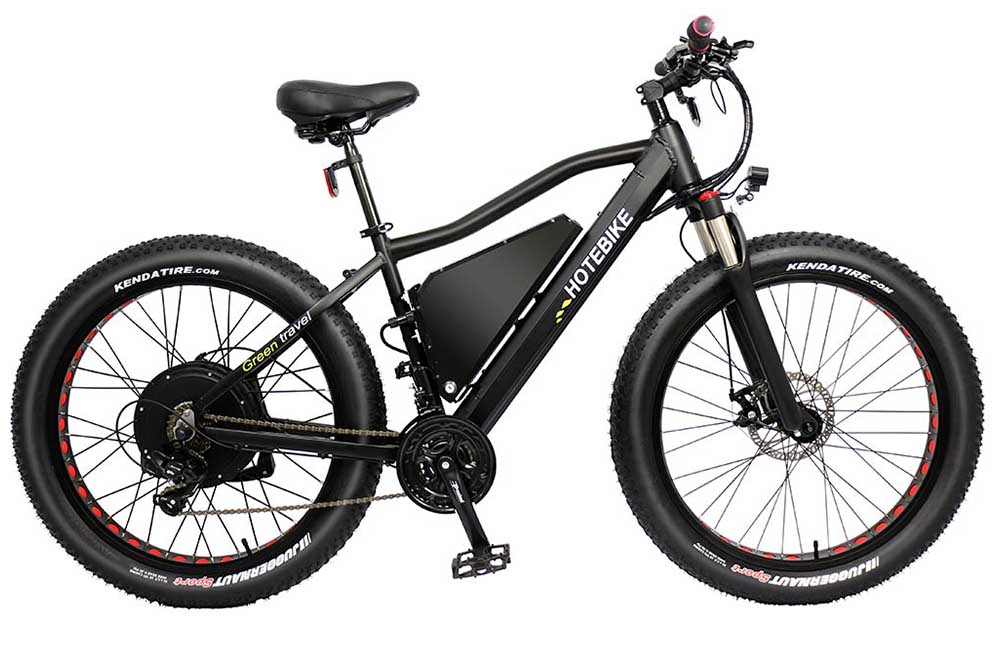 Road bikes and racing bikes are designed for smooth, fast travel on paved roads. They are stylish, lightweight and easy to handle. They have narrow tires, multiple gears, and use disc or rim brakes. The handlebars of road bikes are usually “dropped”.

These bikes are primarily designed for speed and a smooth ride, not great off-road or rough terrain. Replacing certain components can improve rider comfort, but you may add weight to the bike and reduce potential speed.

BMX bikes are often used for stunts and tricks or racing on muddy tracks. In fact, their name is short for “Bicycle Motor Cross”.

They have smaller frames and wider wheels, which makes them popular with kids. However, seasoned adult BMX riders can pull off some of the most impressive stunts. These sturdy bikes travel at a single speed and can handle a lot of shocks and sudden stops.

A touring bike is a road bike used for long rides. They can be used comfortably for long periods of time and can carry light luggage.

Designed for pavement travel, they may be ok on less rugged terrain and flat trails. They are durable, stable, and do a great job of evenly distributing the weight of the rider and luggage.

In the lower gear range, the touring bike can carry light to moderate loads. Hills can’t match these rugged bikes. They are popular with commuters and explorers.

BXR bikes are a subcategory of touring bikes. It has a sturdy BMX-like frame that can handle more off-road situations. Mechanically, they are simpler than traditional touring bikes, and many riders prefer to be on the road, which makes sense to me. Who has time to stop and look for an expert to do a repair while traveling? 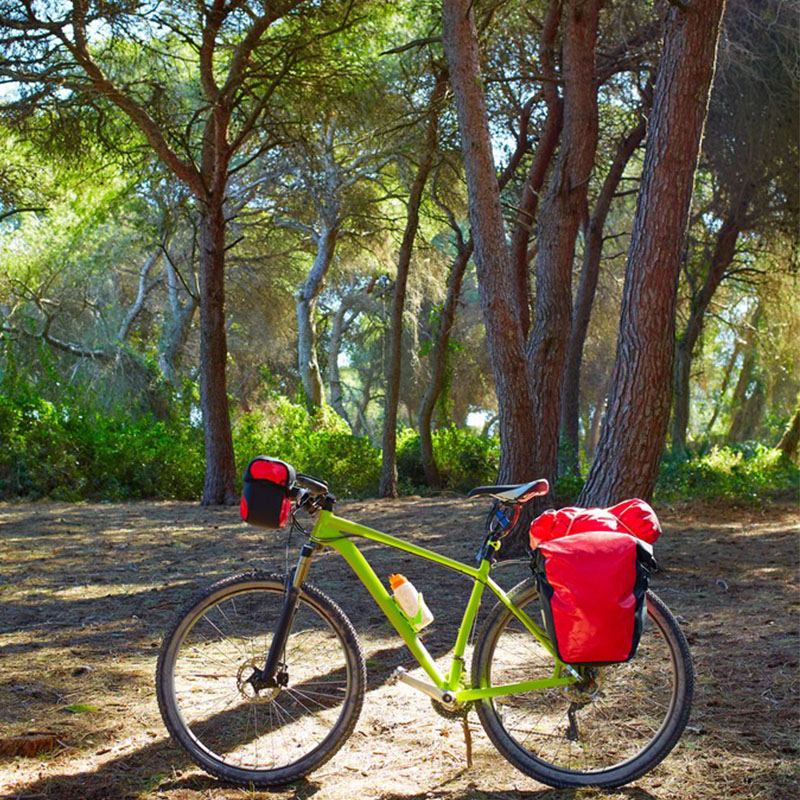 Race cars are built with speed in mind. They are used in competitive road races. Their lightweight frames and components are aerodynamic and stylish. Accessories aren’t really a thing for racing. All the attention is on making these bikes lightning fast.

With narrow tires and high pressure, these bikes have a tight gear range. They are not designed for comfort or long rides, but there are many modification options available to fine-tune your performance.

In the racing category, you will find sub-genres like time trial bikes. They have a more aggressive frame style that forces the rider into a more aerodynamic position. They’re not very maneuverable, but that’s not necessary when speed is your main goal.

You can also find triathlon bikes in the racing category. The upright seatpost keeps the rider in an efficient position that activates the hamstrings and glutes. Finally, rail bikes are simple bikes that are used on indoor or outdoor bike paths.

Flat-bar road bikes are somewhere between a hybrid bike and a road bike. They have mountain bike style shifters and flat handlebars. Sometimes called an exercise bike, it’s optimized for use on smooth, paved roads.

Off-road bikes are sometimes called “off-road bikes” and their frames are similar to touring styles. They have wider rims and tires and are popular commuter bikes.

It’s a style that goes beyond its intended use. They were originally designed for racing, but have since caught on as everyday bikes. The lightweight frame and ease of use helped push off-road bikes into the mainstream.

Hybrid bikes offer the best of both worlds between road bikes and mountain bikes. Sturdy and rugged, they also perform well on flat paved roads. They usually have lighter frames and medium-sized wheels.

In the hybrid bike category, you can find a variety of specialty types. These include:

Utility bikes are all about practicality and everyday use. You won’t get a lot of speed and you won’t be able to do nasty tricks with a utility bike, but you’ll get around town with efficiency and stability. They are designed with the average average person in mind, so long skirts and trousers don’t get caught in chains, and fenders keep the rider clean.

Cargo bikes are used to transport heavy loads. They have sturdy frames and wheels, and usually have a large basket or flat area to carry heavy loads.

These are the typical hard-working bikes you often see in cities or industrial areas that are difficult for passenger cars to pass through. Bike messengers often travel on this type of bike. Subtypes include:

long tail bike
butcher’s bike
porter bike
special and unusual bikes
Not all bikes are created equal, and these particular bikes prove that. The bikes on this list are built for specific tasks and situations, with specialized parts and designs to help riders get the most out of their purchase.

Like the mainstream bikes on this list, these unusual bikes can be modified. However, the changes you make often greatly reduce the effectiveness of their intended purpose. Be very careful when modifying any of the special bikes on this list.

As always, do your homework and make sure you understand the effects of modifying your bike!

Fixie bikes or fixed gear bikes won’t appeal to most riders. They are single-gear and have no brakes, which scares some riders. To slow down or stop, you must stand on the pedals.

However, many cyclists prefer stationary due to their extreme simplicity. They can be highly modified and usually cause no damage, and they also provide a great workout. Since stationary bikes cannot slide, the rider must continue to pedal to keep the bike moving.

Tricycles aren’t just for kids! In fact, these powerful bikes are beloved by city dwellers and rural riders alike. The trike has three wheels and is the most stable of all the bikes listed here. In terms of comfort, the trike can’t be beat. When you stop, you can stay in your seat without worrying about tipping over.

Tricycles also bring the joy of riding to more people. Riders of different abilities and older can use these with confidence, regardless of their limitations. For example, older or nervous riders don’t have to worry about balance, and riders with only one arm or one hand will find it easier.

Tricycles are generally better suited for towing large loads with a trailer than two-wheeled bicycles. Many trikes even have a cargo box built in.

Tricycles are basically human-powered taxis, but it also doesn’t say you can’t use them to transport cargo or personal items. There are only a handful of manufacturers, and they tend to be very expensive.

Technically, these are three-wheelers, but the addition of a passenger area puts them in a category of their own. Tricycles are used all over the world, especially in high-density areas where motor vehicles are difficult to navigate.

There are many other names for tricycles, including:

Bicycles are quad bikes for 1-6 people. Although they’re not much faster than mainstream bikes due to the extra weight, they can be fun. They are also an efficient way to transport multiple people.

Although they’ve been around since 1853, they’re ultimately considered ideal for riders with special needs, those who have trouble balancing, or those who are particularly afraid of falling off a two-wheeled bike.

You may also see quads used as tricycles or rented out in tourist areas. There are also many new models for personal ownership for touring.

A recumbent is a reclining bike where you sit on a bucket seat with a backrest with your legs in front of you. Recumbent bikes are very comfortable. It’s like riding a La-Z-boy recliner.

Before you think this is a lazy bike, consider the ergonomics of this particular design. As the rider leans back, their weight is more evenly distributed across the frame. This prevents any one muscle group from being injured and overworked.

The posture of the backrest also allows more users to enjoy the fun of riding. For example, those with spine and neck problems may benefit from this altered position. These bikes also put less stress on the hands, feet and sit bones.

Semi-recumbent bikes are a mix of fully recumbent and upright bikes. They are also sometimes referred to as crank-forward bikes. These bikes are all about comfort and ease of use, sacrificing speed and aerodynamics.

Velomobiles are fully enclosed recumbent tricycles. They are perfect for touring as the fully streamlined housing reduces wind resistance, allowing them to travel very fast, even when hauling extra gear for touring.

The downside is that they are expensive and as far as I know they are only made in Europe. This means that shipping to another country adds a lot of cost.

Electric assisted bicycles (or e-bikes) have small motors that help you go up hills or speed up. They won’t do all the work for you, though. You still need to pedal; it’s easier to pedal when you have motor assist.

The motor is usually powered by a small battery that you can charge by plugging it into the wall. There is usually an easy-to-reach switch on the handlebars that can be turned on and off as needed. You can buy a complete bike and motor, or simply buy the motor and attach it to your existing bike. 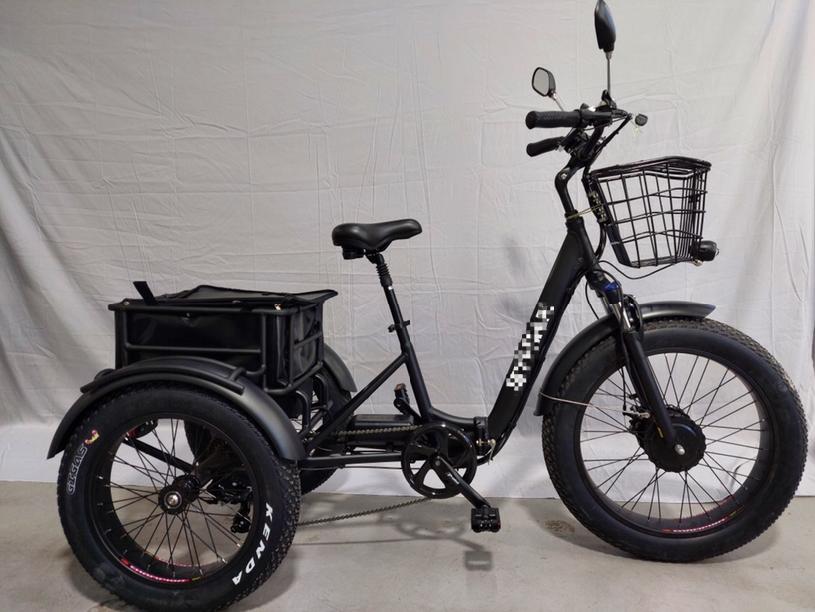 Other unusual bikes – just for fun!

still? Excellent! Since I still have your attention, how about a look at some of the weirdest and most creative bikes out there?

Someone actually built a dog-powered scooter.

Here are some quirky, quirky wheelbarrows.

thirsty? How about this bike that powers the mixer?

Did you know you can generate electricity with a bicycle? These guys did it.

I think it’s clear now that bikes do come in all shapes and sizes. With so many options on the market, cyclists of all types should be able to find something to suit their needs.

Hope you found some new information about bikes and learned some cool stuff today. Maybe I even piqued your interest in new bikes. Thank you for coming!


Tags：ebike
Share:
Prev： Do you need new rims for bigger electric bike tires
Next： How to Convert Your Bike to an Electric Bike