Folding bike tours are becoming an increasingly popular niche in bike tours. The best touring folding bikes have many unique advantages over traditional touring bikes. They’re versatile, easy to transport, safe, and get you where other bikes can’t. Of course, there are some notable drawbacks as well. This guide lists the pros and cons of touring on a folding bike. We’ll cover bike shipping, maintenance, parts availability, comfort, safety, luggage options, efficiency, cost, and more.

In recent years, folding bikes have become more capable touring machines. Today, they are a realistic alternative to full-size touring bikes. Many manufacturers even offer specific models for touring. Folding bikes are available in a variety of luggage options, travel components, tires and accessories.

What is a folding bike?

A folding bicycle is a bicycle designed to be compactly folded or folded. This makes the bike easier to transport and store. You can take your folding bike with you, including hotels and public transport.

When touring, you can fold your bike, bring a bus, train or plane, and tour when you arrive at your destination. Folding bikes are a great way to explore the city and even on long trips.

Many different folding designs exist. The most common design has a hinge in the center of the main tube that allows the bike to fold in half. The more compact design has a second hinge that allows the rear triangle and wheels to fold under the bike. In both cases, the seatpost and handlebar stem will fold or collapse.

1. Folding bikes are cheap or free to fly

The biggest benefit I’ve found to traveling with a folding bike is that you can save a lot on airfare. Bicycles can be flown as regular checked baggage on most airlines as long as they meet the checked baggage size requirements.

For most airlines, this means that you must pack your foldable bike in a package that measures less than 62 linear inches (158 cm) overall and weighs less than 50 lbs (23 kg). On international flights where one checked bag is included in the fare, checked folding bikes are usually free. On domestic flights, you may have to pay $25-50. You will pay standard checked baggage fees.

It’s usually much more expensive to check out a full-size bike. Each airline charges different rates. Most airlines charge $100 to $200 one way. Of course, some airlines are much cheaper. For example, the Alaska Air lets you ride a bike for just $25.

2. You can ride folding bikes on buses, trains, taxis and Uber

Folding bikes are packaged small enough to fit in luggage storage areas on buses and trains, and in the trunk of any taxi or Uber. If bikes aren’t allowed, you can simply fold the bike up, stuff it in your bag, and no one will know what it is. It looks like a big luggage.

3. You can bring your folding bike into your hotel room, dorm or Airbnb

Many hotel managers don’t want to keep bicycles in their rooms. The reason is that the bike is dirty. They can bring dirt and grease into the room. You could also damage a wall or door if your bike hits something while moving. While understandable, most cyclists dislike these policies.

Because folding bikes are so small, they can be stored in a large bag. As long as the bag is clean, most hotel managers will let you bring it into the room. If you pack your bike before you check in, they don’t even know what it is.

Carrying your bike with you in your hotel room will give you more peace of mind. You don’t have to worry about it when your bike is locked out or who knows who can use the storage room.

4. You don’t have to ride a bike everywhere

You are free to skip boring or dangerous sections as you tour on a folding bike. For example, maybe you’re arriving in a big city and you don’t want to cycle through heavy traffic. You can hire a taxi or Uber to take you to your hotel. Maybe you’re riding through a flat, dry area that’s not very scenic. You can take the bus to the mountains or the coast and skip that part. If you just don’t like cycling, you can pack your bike and travel like a backpacker. 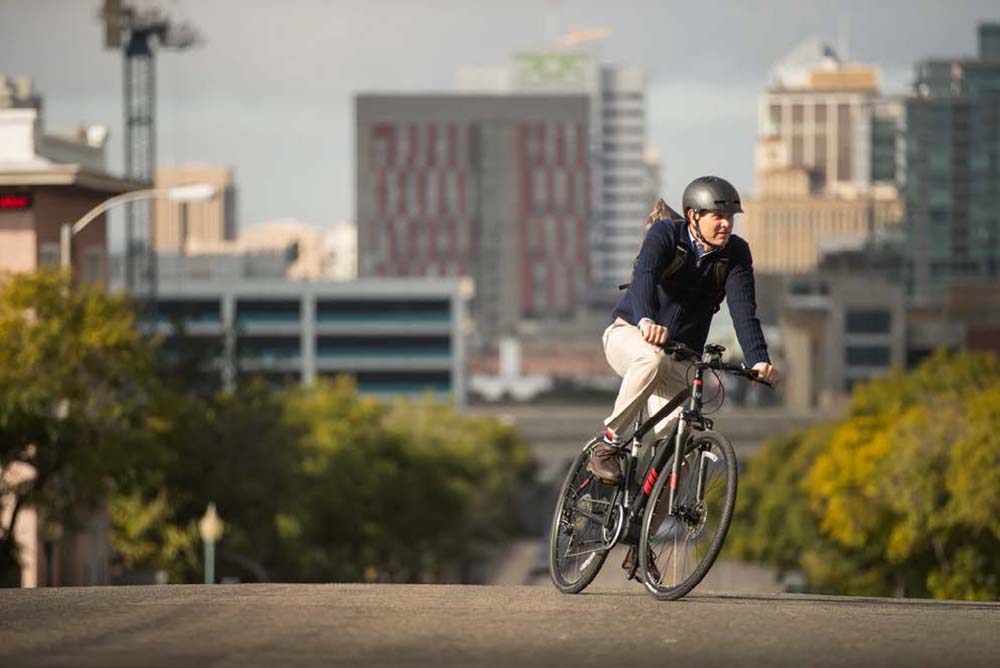 Maybe during your trip, you decide to take a cheap flight to a neighboring country or a nearby island. With a folding bike, you can pack it up and fly with relative ease.

You can also store your bike at the hotel’s luggage storage and take a side trip without a bike. If you’re touring on a full-size bike, side trips can be expensive or impossible.

6. Folding bikes are easier to pack and transport

When flying on a folding bike, you don’t need to bother looking for a full-size bike case. You can make a good-sized box by cutting and pasting smaller boxes. You can pack your bike in the comfort of your hotel room.

When traveling by bus or train, you can carry a folding bike bag and store your bike in it. Sometimes, you don’t need to pack your bike at all. You can fold it up and put it in your luggage. Some people even bring their folding bikes into the cabin and store them in the overhead bin. Check out this cool site for photos.

7. You don’t have to worry about being trapped

If your folding bike fails catastrophically and you can’t ride it, you can hitch a ride back to civilization. You can tow a folding bike with even the smallest car. This is usually not an option for full-size bikes.

8. Folding bikes are easier to load and unload

Most folding bikes come with a stepper frame. This allows you to get on and off the bike with ease. You don’t have to lift your legs over the top tube every time you mount the bike. This can be a plus for older cyclists as well as those with joint issues. Folding the bike is more convenient.

9. You can bring your folding bike into restaurants and grocery stores

Most restaurant managers won’t mind if you fold your bike and put it at the table while you dine. When you go to the grocery store, you can put the folding bike in the shopping cart.

You might think small wheels will slow you down. But in fact, it’s not. A premium folding bike designed for touring can be as fast and efficient as a full-size touring bike.

There are several reasons for this. First, the smaller wheels are noticeably lighter. This means they have less rotating mass. They spin faster and with less effort. Manufacturers also tweak the gearing to compensate for the smaller wheels. With a small-wheeled folding bike, you don’t have to work any harder.

1. Some parts wear out faster

Rims, tires and hubs don’t last as long on a folding bike. The reason is that the wheels need more revolutions to travel the same distance as a full-size bike. As a result, they wear out and need to be replaced more frequently. For example, you might only get 5,000 miles on a 16-inch folding bike rim. A 700c touring lap might last 15,000 miles. This increases maintenance costs. 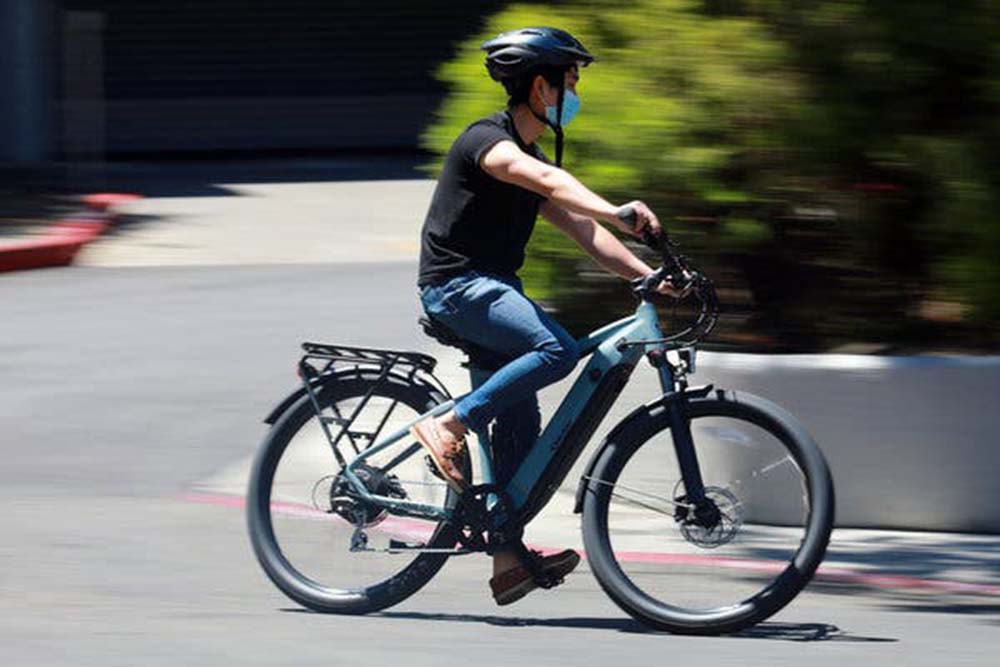 While touring, you may find yourself in a country that is not serviced by the manufacturer. You may not be able to get the parts you need. Third-party options are generally not available. If the brand goes out of business in the future, you might have a hard time finding some parts.

An example of a component that is exclusive to most folding bikes is the frame hinge. Some folding bikes use proprietary brakes, racks, cranks, derailleurs, handlebars, etc.

3. Some folding bike parts are harder to find

Some folding bike parts are oddly sized. For example, 16-inch wheels and tires, short-cage derailleurs, and extra-long seatposts are common on folding bikes, but not on full-size bikes. Many bike shops do not stock these items.

Quality wheels and tires can be especially hard to find. This can be a problem if you are touring in developing or remote areas. If something is damaged or worn, you may need to ship spare parts.

4. Folding bikes can be uncomfortable

Taller riders can feel cramped on a folding bike. Many models are designed for riders under 6’4″. Smaller wheels can also make for a rougher ride.

They just can’t take the hits a full-size touring bike can. This is partly because the hinge creates a weak link in the frame. The extra-long seat tube and handlebar tube can also create weak links.

This additional cost is due to the added complexity of the frame and folding mechanism and proprietary components. These parts are more expensive to design and manufacture because they are available in smaller quantities. Manufacturers have to cut costs elsewhere to meet their price points.

Hinges and long seatposts and handlebar stems create weak links. The load carrying capacity of a folding bike is lower than that of a diamond frame bike. Most folding bikes can safely haul 110kg or about 240lbs. This includes the rider and luggage.

Not enough if you’re a big guy or like to come home full. By comparison, a decent full-size touring bike can easily handle 300 pounds. Some can carry more.

There are many reasons. On top of that, folding bikes tend to have some flexibility. There may be some flex on the hinges or main frame tubes. The long handlebar post and seat post can also be bent. Folding bikes are not as rigid as full-size bikes. When you pedal hard, some of your pedaling effort might be wasted on flexing the frame. Transmissions also reduce efficiency.

Reduced efficiency means you’ll cover less ground and burn more energy when traveling on a folding bike. For example, maybe you’re used to driving 50 miles a day while traveling. On a folding bike, you might only get 40 miles a day. This inefficiency adds up over long journeys. Folding bikes may travel 200 miles less per month than full-size bikes.

9. Folding bikes are rougher to ride than full-size bikes

Because the wheels are smaller, folding bikes can’t roll over potholes and bumps easily. When you hit a pothole, the smaller diameter wheel may fall further into the pothole. When you hit a bump, it’s harder for the wheels to roll due to the higher angle of attack.

This makes the bumps feel more harsh. This means that folding bikes are not suitable for gravel and trail riding. Some folding bikes offer suspension to improve ride quality.

Folding bikes can also feel a little twitchy due to the small wheel size. Small wheels turn faster than big wheels. The bike reacts faster when you turn the handlebars. It takes some getting used to.