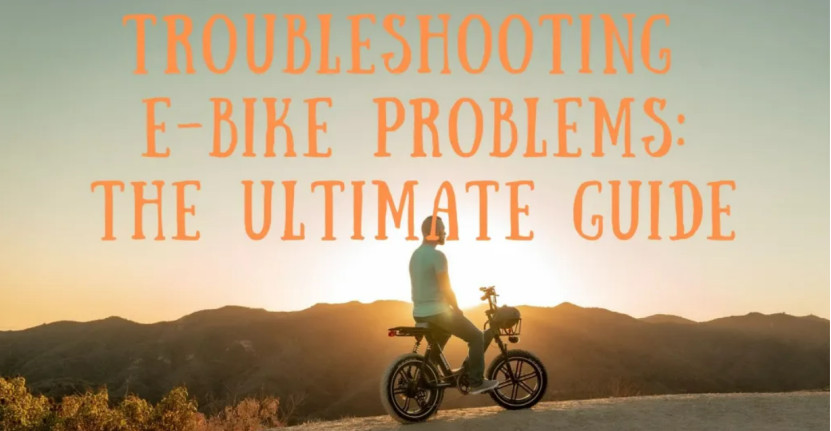 Maintaining an ebike in good working condition can be tricky business, especially if you’re a newbie ebike rider.
An ebike will work smoothly only when all the parts are functioning properly. Luckily, not every hiccup with your electric bike means there’s a major problem. Sometimes, it just needs a bit of DIY maintenance.

Not to mention, many ebike owners don’t live near an electric bike service shop, so getting the job done themselves can be a lifesaver. In any case, knowing how to troubleshoot common problems of ebikes is valuable information for anyone owning an electric bike or thinking about buying one. In this article, we’re sharing a full guide on how to troubleshoot common ebike problems to help you get back on the road in no time. So without further ado, let’s get started!

If your ebike won’t start or keeps cutting off, the issue can often be traced back to the battery. Even if you’re just doing a routine troubleshooting session, the battery on your ebike should be the first component to inspect. Here are some ways to troubleshoot battery problems:

The first thing you need to do is check the battery voltage. The LEDs on the control panel and the ebike should light up, if this doesn’t happen, then there’s a chance that the battery hasn’t been charged or there may have been a blown fuse.
Checking the battery voltage can give you a clue as to whether or not the battery has been damaged.
You can check the voltage of an ebike using a voltmeter by simply attaching the prongs to the positive and negative sides of the prongs on the battery. Another way to get a reading is to fasten the voltmeter directly into the charger connector on the battery.
If you find that the battery power dies out too quickly, then the first you should do is determine how long the battery pack has been left without charging. Accordingly, you’ll be facing one of 2 scenarios:
If the battery pack hasn’t been charged for 6 months or less, you may be able to recharge it successfully.
If the battery pack hasn’t been charged for more than 6 months, then it’s probably defective.
If you know that your ebike has been sitting in the garage for some time without recharging and when you try to start it, the battery loses power too quickly, then it’s safe to assume that the battery is defective and will require a replacement.
If you’ve charged your ebike battery for less than 8 hours, try letting it charge for 8 hours and then check if the electric bike can run at full speed. We highly recommended not to leave the battery charger plugged into your electric bike for more than 12 hours. This is to avoid the risk of overcharging or damaging the battery if the charger malfunctions.
Check the Battery Charger
While you’re at it, you should also check the battery charger. You don’t need any tools to get this done; just plug the battery charger into the wall and see if one or more of the indicator lights are illuminated.
If the indicator light doesn’t illuminate or even blink on and off when the charger is plugged into the wall, then you’re dealing with a defective charger. To test the output voltage of your battery charger, you can use a multimeter or voltmeter.
The voltage reading must be a few volts higher than the battery charger’s rated voltage. If the output on the battery charger is lower than the battery charger’s rated voltage or if it’s zero, then the battery charger is defective.
For example, if your ebike is equipped with a 36V battery but the voltmeter reads 10 volts, then the battery is faulty. In this case, it’s a good idea to check if your ebike is still under warranty.
If so, then you can contact the manufacturer and file a warranty claim for replacement parts. But if not, then you should buy a new battery.
If the voltmeter reads a surface charge of more than 36V, then the battery is fully charged and you can try troubleshooting another component.

If your ebike keeps cutting off, one of the most common reasons for such hiccups is a failing battery. If your battery pack is particularly choking when under load, then the issue could be that the battery management system is shutting it off to protect your battery pack from overeating.
Typically, the battery management system will cut off the power if it senses the battery draining too fast below certain safe levels.
Often than not, a severe voltage drop means that one or more cells in your battery pack have been damaged. There are several reasons for such malfunction including aging, too frequent charge cycles, improper battery management, and a manufacturing defect.
If you’re experiencing power cuts with a new ebike that you’re just starting to use, it might be because the pack has been sized, engineered, or manufactured with less than the required high current capacity for supporting heavy loads.
When cells fail, it’s usually due to being under severe loads. One way to solve this is by dropping the assist level and pedaling a little harder when going up steep inclines or hills. This should reduce the load on your battery.
Another thing to keep an eye out for is the possibility of your battery arriving already pre-aged. This can happen in lower-quality batteries that are typically installed in cheaper bikes because they’re made by recycling batteries from other older devices such as laptops.
To find out if your battery is the culprit behind the repeated choking of your ebike, try using it on a different reliable electric bike with the same setup as yours. The same problem should happen if the battery is faulty.
If you’ve owned your ebike for a few years and you’ve used it almost every day, the frequent rides may have just pushed the battery pack towards the natural end of its lifespan. Here, buying a new pack from the manufacturer will solve the issue.

If you’ve dropped your ebike, then a part of the handlebars may have been damaged. You can easily spot this by visually inspecting your handlebars and brake levers for signs of any cosmetic damage.
If you find that the brakes have been pulled back because of damage and can’t seem to break free, this will cause the motor inhibitor switch to stay turned on. To get your ebike running again, you’ll need to fix the jammed brake levers.
If the damage is significant, then the switch itself may require replacing. Such a process will need the skills of an expert electric bike mechanic.
Some people may suggest that you use your controller to figure out which wires are for the brake inhibitor so you can disconnect them completely to get rid of the problem. However, we stress that you never do that as it can be extremely dangerous on the road.
If your brakes aren’t functioning properly, then you should check the shoes or the brake pads for signs of wear. If they’re damaged or worn out, replace them right away. You should also check the brake cable tension and adjust it if necessary.
If you find the brake pads or the brake shoes in good condition then you may want to tighten the brake cable adjuster on the brake lever or the brake itself until the brake becomes more responsive. Make sure that the brakes aren’t rubbing on the rotor or rim when the brake lever is released.
Once you’ve adjusted the brake cable adjusters to the end of their limits, screw them all the way in. Then, tighten the brake cable by loosening the brake cable stopper, pulling the brake cable tight, and re-tightening the brake cable stopper.
You can make a final adjustment to the brake cable tension by unthreading the brake cable adjuster until you get the right tension.
It’s crucial to your and others safety that you maintain the braking system; keep discs and rims clean and straight, promptly replace any worn-out brake shoes and pads, replace frayed or worn cables and housings, and lightly lubricate brake pivot points.
3. Troubleshooting the Controller
Think of the controller as the processor of your ebike operating system. As a result, it’s also one of the most common reasons why your electric bike may not be working properly. The controller’s job is to take input signals from all the controls and sensors on the ebike, analyze them, and then determine the best way to transfer the power coming from the battery to the motor. Since the controller serves a huge yet sensitive purpose in the functioning of an ebike, the slightest technical glitch could ruin the established balance in any aspect including power transfer and distribution.
Inspect your controller for any wires that may be loose, disconnected, or misconnected. If you do see disconnected cables, reconnect them to the proper port. In general, the wires should be color-coded so you can match the same color wire with the same color the outlet.
If the controller doesn’t work at all, make sure that the power switch is turned on. Also, check the fuse or circuit breaker.
If your ebike comes with a circuit breaker, you can reset the circuit breaker by pushing the breaker. However, you should be aware of any problems that may pop up as circuit breakers are designed to protect the system and there could already be an ongoing problem that’ll seriously damage components.
For ebikes with a fuse, you can simply remove it and hold it against some light to see if it’s burned out. If so, replace the fuse.
4. Troubleshooting the Throttle
A lot of ebikes on the market come with throttle control. If you overuse the throttle control, it may get stuck when pulled back and won’t return to the off position on its own.
If you do this repeatedly, the throttle will eventually loosen or get damaged. If this happens, you’ll tend to experience power cut-offs.
The safest way to use the twist throttle is to pull it back and then slowly release it back into its original position once you’re done.
If the throttle is feeling loose or missing out on strokes from time to time, you can just replace it after testing whether or not it’s receiving steady power. This way you’ll know for sure that your throttle is to blame.

There you have it, a comprehensive guide on how to troubleshoot common problems of ebikes. Even though DIY maintenance can be easy to perform, it’s still best to bring your electric bike to a service shop if you’re not fully confident in your skills.

Tags：E-Bike Problems
Share:
Prev： How To Convert Your Bike To An Ebike
Next： Cold Weather Cycling Gear: How To Be Prepared