Winter Cycling Techniques For Any Kind Of Snow And Ice

There are certain common techniques that seem to be useful in many varieties of snow and ice. If you are new to icebiking you may find the collected experiences of dozens of other icebikers from all over the world useful in your first year. These tips were garnered from the mailing list topics.

You will also find that your bike handling skills improve remarkably during a winter of riding. You will gain an appreciation for and an ability to judge road conditions. You will get over the “tensed up” rigid riding that so often afflicts new winter cyclists. You will learn to plan your stops, to judge and select the path of most traction. 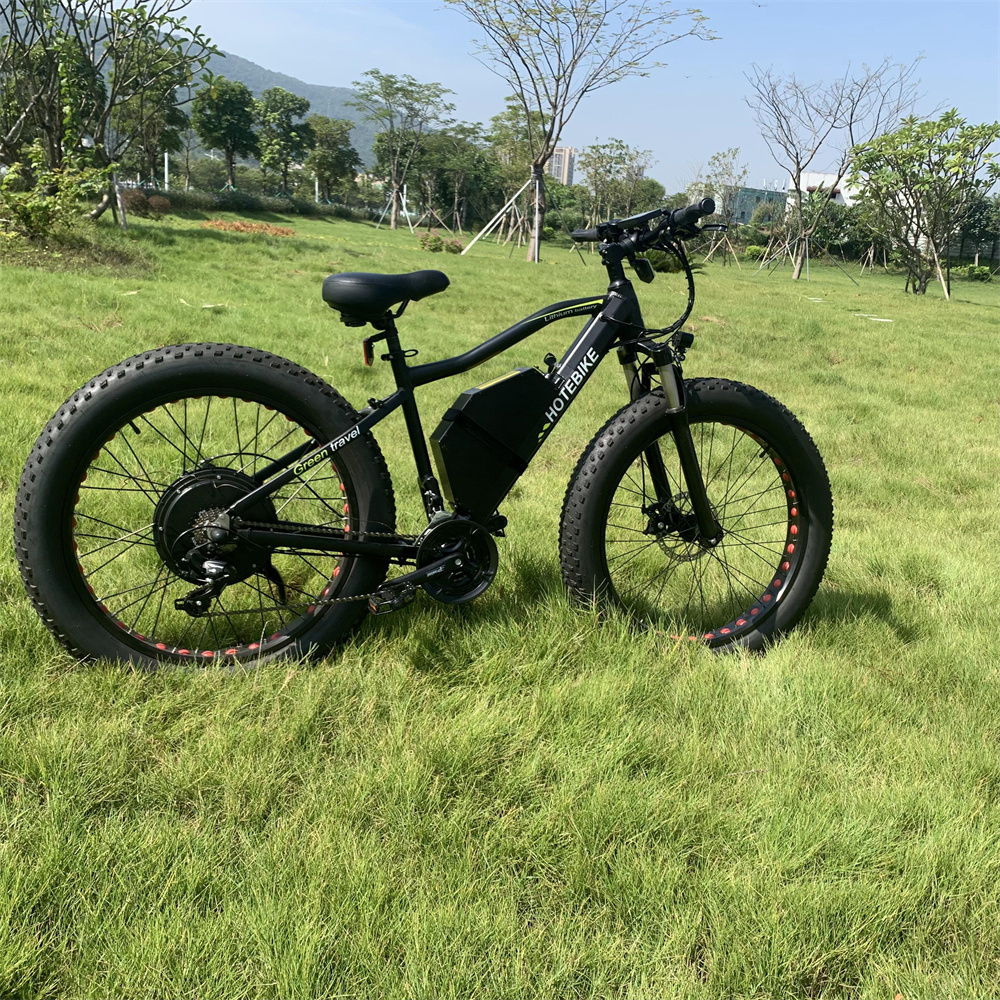 Black Ice, that thin layer of ice covering roads, perhaps only in shadowed area, can be one of the most insidious winter risks to deal with. You can be riding along on bare pavement one minute and sliding down the road the next instant.Black Ice is called Black, because it takes on the color of the underlying pavement. It is very thin, and often gives the impression of having some surface irregularity, and therefore appears to supply some traction. These looks can be deceiving, because as soon as you apply brakes (or make significant turning movements) you start to slide. 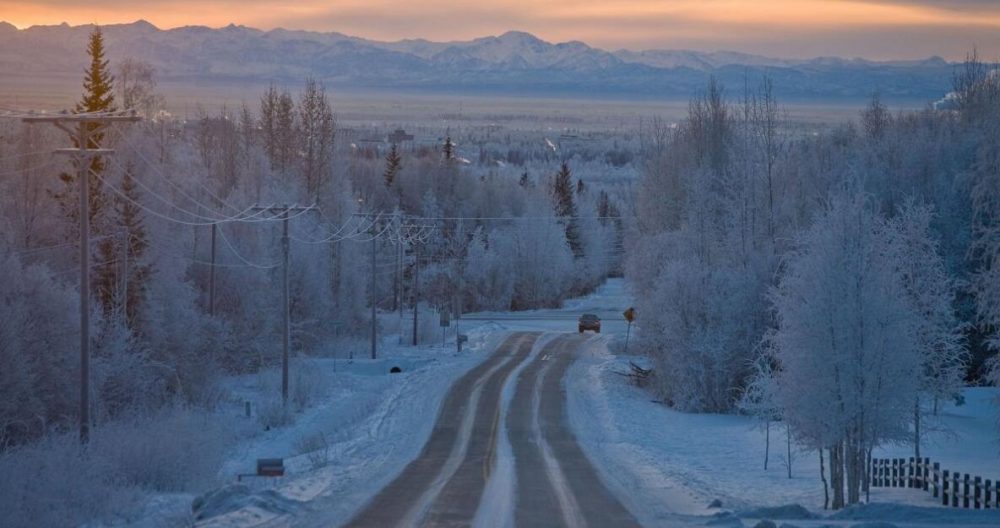 Turns on Black Ice are best accomplished by keeping the bike as upright as possible. This may involve offsetting your upper body to the side (toward the direction you want to turn) while at the same time keeping the bike upright.
The principal reason to keep the bike upright is NOT to keep more of your tire tread (or studs) in contact with the road, but more simply, that a leaning bike necessarily puts lateral forces on the tire at the contact patch. The contact patch (where the rubber meets the ice) is that preciously small area providing all the traction. Black Ice frequently does not supply enough traction to counteract this lateral force, the tire slips out from under you, and down you go.
Turns with the bike mostly vertical also imply slow turns. That, more than anything is the name of the game.

Braking on Black Ice will cause a slight melting of the surface layer of the ice, producing a very thin layer of water. Water on ice is a lot more slippery than just ice.Braking must be done with great care, and principally with the back brake. The front brake of a bicycle supplies way more braking power than the back brake. The more it works, the more weight is transferred to the front wheel, and the more the braking force applied to the contact patch.The problem in winter is that you will quickly break traction with the front wheel. Once you do, your chances of remaining upright are minimal. Reserve the limited traction of the front wheel solely for steering. Brake with the back wheel. Transfer weight rearward, (stick your butt out behind the seat), to keep as much weight over the braking tire.As long as you can steer you have a good chance of remaining upright. This is why if you only have one studded tire it belongs on the front. It is also why you want to avoid braking with the front wheel on black ice. Even with a locked up rear brake, and the rear wheel skidding, as long as you stay off the front brake, you can steer all the way down icy hills too slippery to walk.

At the side of the road, there is usually an area covered with sand and other debris swept there by car tires. Sometimes there is just fresh untracked snow there.
In Black Ice conditions this grit becomes “glued down” by the same ice that is covering the road. Its like riding on sandpaper. There is far more traction in the girt than on the Black Ice itself.
Similarly, when there is some snow around, the snow will often provide more traction than the ice. Even light snow directly on top of Black Ice may provide better traction than just the Black Ice. This is because snow is angular, and the angular particles catch and bind on on another, your tires, and the ice below.

Once melting starts, snow can add to the slipperiness of the underlying ice, so occasional tests with the rear brake give you a good idea of the traction below. 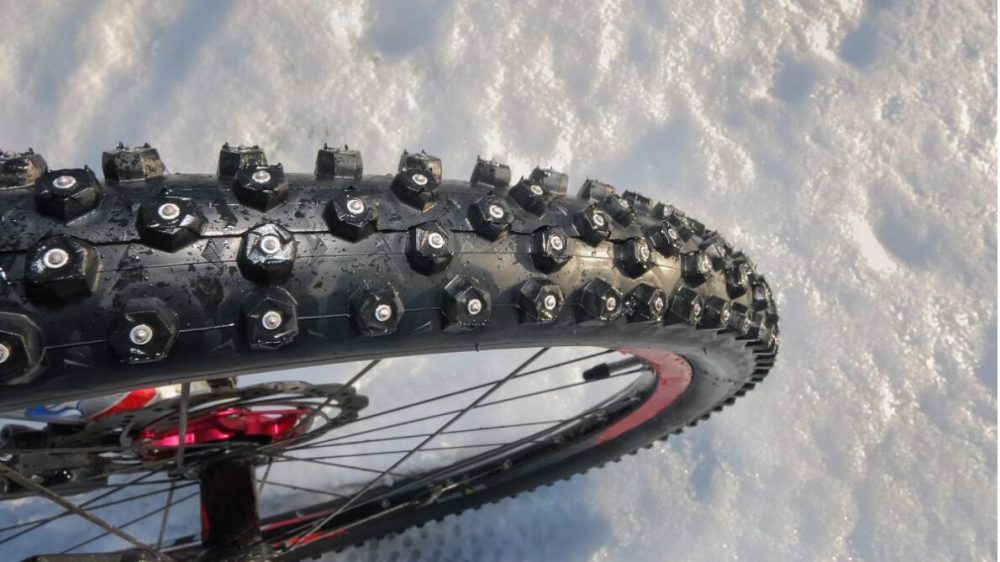 Studded tires are great on Black Ice. In fact, this, and hardpack are the best areas for stud use, they are largely wasted in deep snow.
Studs will provide amazing traction in black ice, and the more studs the better. In fact, you can get down right cocky with the amount of traction you get, and that’s when you find out that all good things have limitations. You still need to be careful with turns and braking. But you can at least consider using just a little front brake.

As mentioned above, look for the traction, stay off the front brake, and wear your studs.
Test Black Ice conditions when going straight, by slowly applying the rear brake till you get a feel for how slippery it is. As soon as the back wheel skids, let up on the brake. Its best to do this early in the ride, so you will have an idea of how long it will take you to stop. Watch hills. Especially watch sharp corners, slow down, drag the foot that is on the inside of the turn. DO NOT BRAKE in the TURN. Your back wheel will spin out if you do.Finally, watch it when you come to a stop. Bike tires, with or without studs, always seem to have more traction than shoes. Its embarrassing to blithely handle 10 miles of black ice and fall on your butt at the front door. 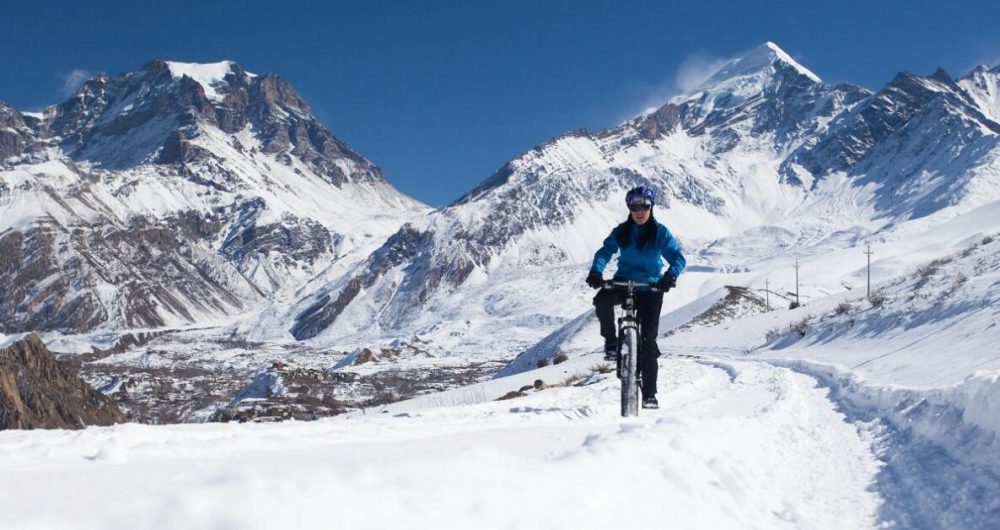 You will find it much easier to travel in totally undisturbed snow than to follow car tracks, or even another bike. If you are the first vehicle along the route your biggest problem is the extra effort needed to push through the snow. If you are following others you also have to contend with their ruts and the front wheel diversions these cause.

On open road ways, watch for small bumps in the snow which appear without any apparent cause. These can signal debris in the road, or potholes under the snow.

In real deep snow, studs are not much help. Look back at your track. If you see compacted snow at the bottom of your track then your studs are probably not touching the ground at all. Usually you can see small dark holes in the compacted layer if your studs are providing traction (you may have to stop the bike to see these). Never the less, in sharp turns you will feel, and often hear, your studs grinding into what ever is under the snow, provided it is not so deep as to keep your tire suspended above the real surface.

You will find that things happen slowly in heavy snow. Falls take a fair bit of time to happen, and you will find that most are avoidable by quick bike handling. Sharp turns that would only exacerbate a fall on ice are quite viable recovery techniques.
By a “sharp turn” I mean turning the handlebar in large increments, and fairly large lean angles. You may feel you front wheel slip sideways. Don’t over react. The snow will supply resistance to this sideways slip, but it takes time to kick in (your tire has to compact a couple inches of snow as it slips before there is real resistance). Maintain forward motion, wait for the tire to catch. More often than not, the side slip will simply cease with you still in the saddle. If you dab, you dab. No big deal.
This is tiring work. Gear down to a sustainable speed 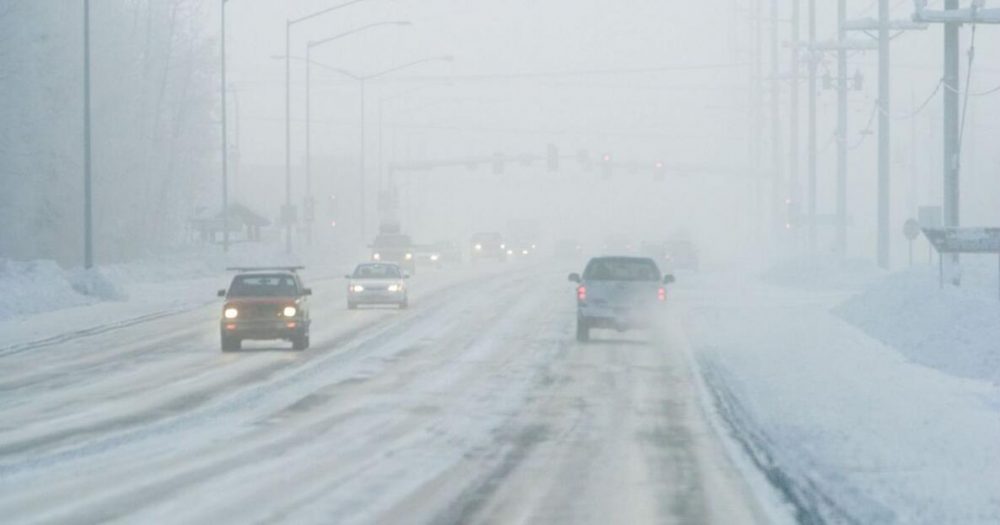 Heavy snow that has been traveled upon by automobiles is one of the most difficult of surfaces icebikers have to deal with.Not only do you have the wheel diversions caused by the ruts, but also the polished smooth surface underneath where cars have spun tires trying to get going.The best technique is to avoid this stuff, riding in the undisturbed snow at the side of the road. While a lot of work, undisturbed snow is always easier to deal with than trafficked snow.
If your balance good you can sometimes make progress following the tire track, but don’t count on it for very long, and certainly don’t expect to make good time. Also, there is a thin layer of highly compacted snow at the bottom of the track, that tends to squirt out from under your tire throwing you slightly left or right.If the snow is still white, it has probably received no sand or salt, and has been trafficked by fewer than 30 cars.

That’s why water pouches like the Camelbak are popular in winter as well as summer. These pouches fit well under your jacket, and they come in a variety of sizes and options from several companies.
The tube can be routed up under your jacket collar. The remaining problem is keeping the “bite valve” and supply tube from freezing. Many icebikers recommend blowing air back into the bladder after drinking thereby keeping the line clear of water. You can tuck the bite valve inside your shirt if it does freeze and it should thaw out (not to mention drip all over you).

Most bladder systems carry the equivalent of about three large size water bottles – around 70 ounces – or two liters. That’s said to be about enough for two hours of heavy exercise in summer temperatures. It might last a little longer in winter, as mentioned above, cyclists seem to need less water in winter.
The human body can really only absorb about a liter of water per hour and does a better job of this if water is supplied in small amounts continuously rather then in large thirst quenching gulps. The bladder system also helps in this regard as the bite valve clips to your collar for quick access and is easy to operate even with lobster claw winter cycling mitts on. You won’t be tempted to delay drinking till you are thirsty – which is too late.

You can find these “systems” in almost any bike store. The name-brand versions seem to cost US$60 to $75. Lesser known brands can be had for under $25 on sale.

Tags：Winter Cycling Techniques
Share:
Prev： How long does an electric bicycle take to charge
Next： Which Type of Electric Bike Throttle Is Best