You’ve likely seen them on trails or bike paths: Equipped with wide tires, between 4” and 5”, fat bikes certainly make an impression. Most cyclists ride them in snowy conditions or sand; run at low tire pressure, they float on surfaces where normal mountain bike, ’cross, or road tires would sink.
And if you live somewhere with snow on the ground, a fat bike can keep you in great riding shape all winter long.
In other words, they’re not just a gimmicky flash in the pan. Here are six things you need to know about this rad style of riding—and reasons we love fat biking in the snow.

Staying fit in the winter is hard, but fat bikes make outdoor exercise possible. Not only that, but they provide tough workouts. On a fat bike, you can burn up to 1,500 calories an hour in soft conditions—seriously. But you’ll also recover faster than if you went for an hour-long run.
“Because it’s not weight bearing, the recovery time is less despite the balance and core strength it requires,” says Andrew Gardiner, former head Nordic Ski Coach for Middlebury College.
If you’re interested in cross-training, Gardner recommends fat biking as a cooldown for Nordic skiing. Many Nordic ski areas stock fat bikes amongst their rentals, he says.
Don’t think of fat bikes as simply winter muscle-burners, though. While fat bike owners average 76 days per year on their big-tire bike, some riders like the stability and suspension of fat tires so much, they ride them all year round. And some fat bikes accept multiple wheel sizes, which means you can throw on a rim with skinny rubber for summer singletrack. 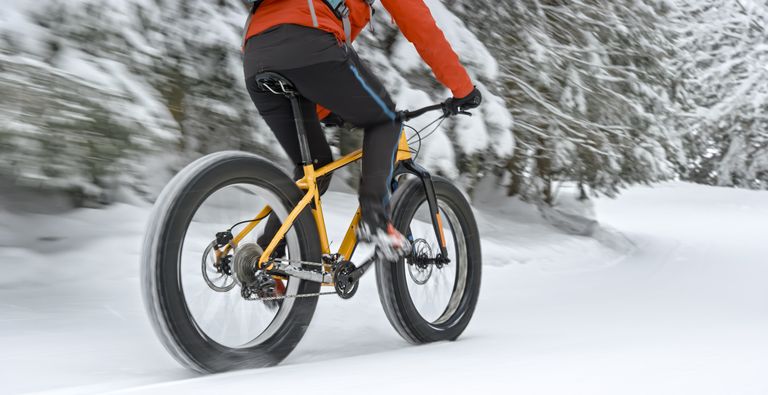 Ever heard of Q factor? It’s the distance between the pedal attachment points on a bike’s crank arms, and it can be a lot bigger on a fat bike, which needs clearance for wide tires and bigger winter footwear. This provides an interesting ride feel you likely won’t find anywhere else in the bike world.
“For the pedal cadence that a recreational rider runs and often times in snow boots with flats, it is not a big deal,” says Chris Cocalis, president of Pivot Cycles. “However, really wide cranks can create knee and hip issues with clipless pedals.”
“As far as optimum Q factor,” Cocalis says, “there’s a wide range of rider profiles and our bodies are super adaptable. At the same time, a 225mm+ Q factor is uncomfortable for most riders. And at the other end of the spectrum, a 157mm Q is also generally not comfortable. 174mm, which is where we landed with the Pivot LES Fat, covers the widest range of riders. A Q factor between 168mm and 178mm is optimal.”
To develop the LES Fat, which has one of the lowest Q factors available, Cocalis and team created a computer model to take into account heel rotation of a size 14 foot in a snow boot, and developed a “No Fly Zone” where the chainstay could not cross. In order to slim the Q factor and maintain a proper chainline, Pivot slimmed the crank spider and utilized a crank that moves the chainrings outboard. Boost spacing moves the chainring outboard 3mm; the LES Fat moves it 7.5mm.

You’ve Never Run Your Tire Pressure This Low Anywhere Else

How well your bike rolls through the sand or snow relates directly to your PSI. And finding the perfect PSI is all about experimentation. But with fat bikes, you’ll be experimenting at the low end of what’s possible, contributing to that awesome floating feeling.
“There is no set formula” for determining your PSI, Cocalis says. For snow, he suggests, the general range is between 5 to 8psi. Wider tires in less packed conditions generally run to the low end. For general trail use, riders run between 8 to 12psi. “A rider in really sharp, rocky conditions, like you’d find in Phoenix or Moab, might run their tires as high as 14psi. Too low and or too high, and the ride gets bouncy,” he says.
Colorado-based pro mountain biker Amy Beisel, who won the women’s race at the Fat Bike World Championships in 2016 and 2019, says, “in a race or on a ride, the snow conditions can change dramatically, so don’t be afraid to play with your tire pressure until you really understand what increasing it or decreasing it a pound or two will do.”

Sponsored bikepacker  almost always picks fat bikes for touring adventures.
“For me, the fat bike is for the 10 percent of terrain on my trips that can’t be ridden on any other kind of bike; it’s for the confidence and undauntedness; it’s for the realization of the absolute limit of what bikes can do off road. They’re perfect,” Cruz tells Bicycling.
In a post on his blog 4 Most Important E-Bike Parts for Maintenance expounds further in a total devotional to wide tires: “It goes just about anywhere a bike can go, and if you’re not racing or trying to keep pace on asphalt with your skinny-tired friends, what’s not to like? I wouldn’t for a second pack another bike if I was packing tonight.”
He’s found that whether you’re facing a trekking trail, muddy river crossing, or sketchy dirt descents, a fat bike is a confidence booster like nothing else.

It’s Easy to Get Into Racing 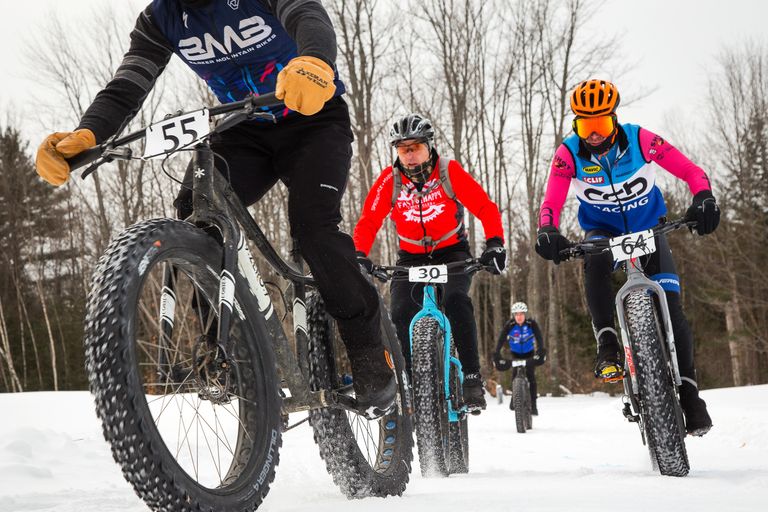 The fat bike race scene is one of the most welcoming. Typically there are no heats, just a mass start.
Take the annual Fat Bike World Championships, usually hosted in Crested Butte, Colorado, every January. Despite the name, the unsanctioned race is as much a festival as it is a competition; anyone can register. The three-day event draws several hundred riders of all abilities to 9,000 feet of elevation.
The first day of fun includes free bike demos on the Town Ranch trails, plus a fat bike polo tournament; the second day features racing, live music, and free food and beer for competitors; and the third day offers a laid-back, fat bike ride sponsored by 45NRTH.

So Many New Ways to Wear Your Kit

When you’re spending time in freezing weather, you need to layer creatively. Some bike companies are beginning to offer fat-bike specific apparel that makes layering simpler, but you can also use cold-weather gear from other cycling disciplines, or repurpose gear from other sports.
Dress like you would for Nordic skiing, says Beisel. She wears two pairs of gloves, booties over cycling shoes, a bike helmet with an enduro strap to hold goggles, Buffs on her ears, around her neck, and an extra in her pack.Winter boots and flat pedals work great if you’re not racing. So do insulated winter cycling shoes.
“The key to fat bike comfort is warm head, feet, and hands—focus on these contact points and you’ll be ready for miles of riding,” Beisel says.
If it’s really bitter cold, consider swapping the bike helmet for a ski helmet.
“For winter, skip the Camelbak and use an insulated bottle,” Beisel adds. Beisel fills hers with warm water. Try tea with honey for a little extra energy on your ride.

How To Use And Shift Bike Gears

Three Basic Bike Maintenance Tips You Can Do Yourself

10 Pro Bike Commuting Tips (How To Really Commute To Work)

How Cycling Makes You Healthier And Happier

Tags：fat bikes
Share:
Prev： How does the electric bicycle shifter work
Next： Fat Bikes Go Beyond the Snow