Is your scooter legal? In a large, evolving industry, the opacity of the answer to this fairly straightforward question borders on comedy. The law varies from year to year, month to month, state to state, and country to country. In order to provide some clarity to the micro-mobile community, we searched all available current documents to provide an authoritative guide to the legality of electric scooters. This article is a living, breathing, and evolving work. With the development and changes in the legal environment of electric scooter riding, this work will also change. The purpose of this work is not only for the benefit of drivers, but also for the benefit of all environmentally conscious citizens around the world who dream of a cleaner and more efficient car future. Accordingly, the article will give you a guide that Comprehensive guide to the electric scooter laws 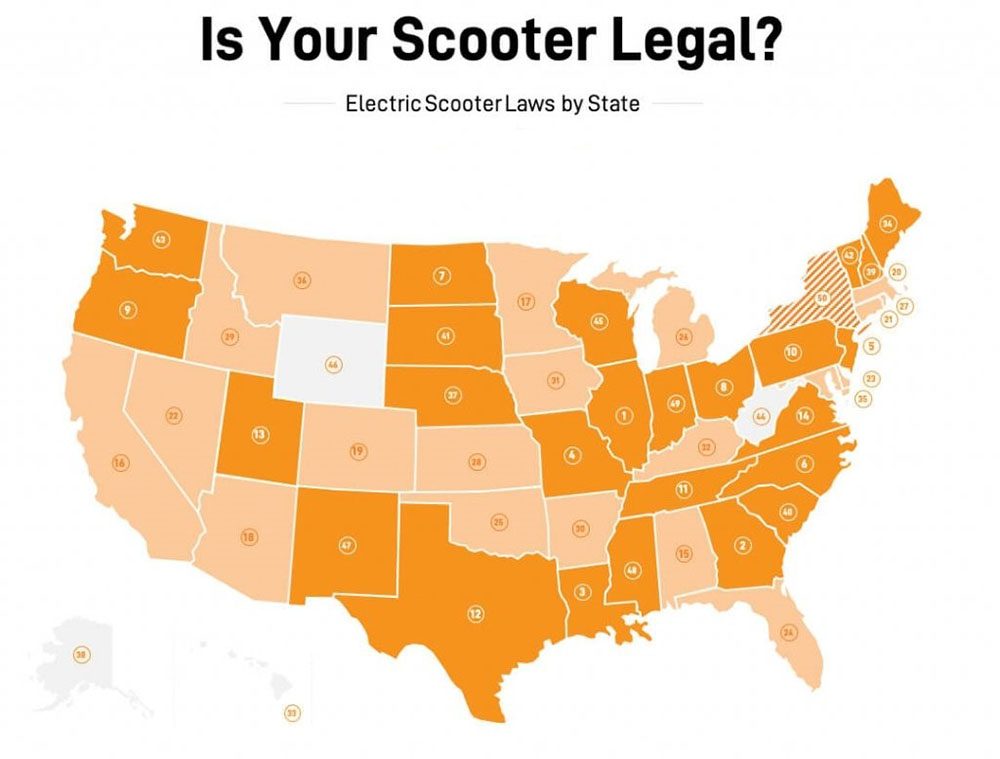 California
California’s new electric scooter laws were passed on January 1, 2019. Electric scooters are prohibited from driving at speeds exceeding 15 mph on any public road or bicycle lane. They are allowed to ride on streets with a speed limit of 25 mph, but even in this case, the 15 mph scooter usage limit is still in effect.
Florida
In Florida, electric scooters without seats are illegal to take to the streets and cannot be operated on sidewalks. Electric scooters do not require registration, and riders over the age of 16 do not need to wear a helmet when riding. However, although any driver’s license can be accepted, riders still need to obtain a permit to ride an electric scooter in Florida.
Michigan
An electric scooter is classified as a wheeled device. Its floor is designed to stand while riding. The length is no more than 60 inches and the width is no more than 18 inches. It is designed to only transport one person at a time. Exceeding 2,500 watts, and the maximum speed on a level paved surface does not exceed 25 mph. The scooter can only be driven on streets or highways where the speed limit is less than 25 mph, except when crossing the road. The scooter must be ridden as close to the right side of the road as possible. Operators must carry no more than 2 people side by side (side by side). The scooter cannot pass other vehicles between traffic lanes, nor can it drive on the road between half an hour after sunset and half an hour before sunrise, unless the scooter is equipped with a white light that is visible at least 500 feet away from the front and the rear The reflector, when under the low beam of a motor vehicle, can be seen within 600 feet. Riders under the age of 12 cannot operate scooters on roads, streets or highways.
Minnesota
An electric scooter or electric bicycle is classified as a device on which the rider can stand or sit (although a seat is not required), has a handlebar, is driven by an electric motor or an internal combustion engine, has wheels no larger than 12 inches in diameter, and the largest on a flat surface The speed does not exceed 15 mph. Riders must be at least 12 years old to operate an electric bicycle, and you do not need a license or registration.
Mississippi

A current bill would stipulate that electric scooters must not be driven on sidewalks that are only for pedestrians, but they can be used wherever bicycles are allowed. Helmets are encouraged, but not required, unless the rider is under 16 years of age. Any child 14 years of age or younger is not allowed to ride on any electric scooters. In addition, the bill stipulates that scooters should be parked upright without obstructing the right of passage. Any scooter that stays in the same place for more than two days can be removed. Scooters must not block bus stops, disabled parking spaces, roadside ramps, and building entrances. 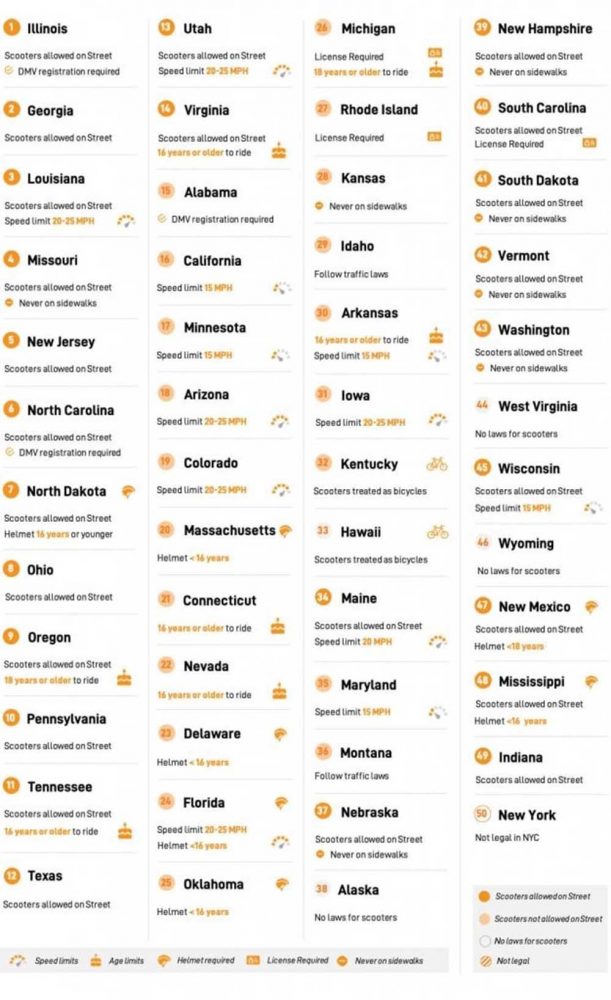 A new bill proposes that the maximum speed of electric scooters should not exceed 19 miles per hour. According to the bill, unless otherwise prohibited by state or local regulations, low-speed electric bicycles and electric scooters can be driven on bicycle lanes, but are generally not allowed on unpaved trails.
New Mexico
In Albuquerque, city regulations include: Riders under the age of 18 must wear a helmet and ride on the bicycle lane on the right side of the road. If there is no bicycle lane, the sidewalk is allowed. Riders must obey traffic laws, signals and signs. Like bicycles, Albuquerque Rapid Transit (ART) lanes prohibit the use of scooters. Electric scooters traveling at speeds exceeding 15 miles per hour are not allowed, nor are they allowed to ride scooters under the influence of drugs or alcohol.
New York
State lawmakers approved electric scooters, but cities have the opportunity to decide for themselves how to regulate vehicles. Shared scooter companies may not operate in Manhattan or densely populated boroughs. It is legal to own your own electric scooter in New York.
Texas
In Texas, electric scooters can only operate on streets or highways where the published speed limit is 35 mph or lower. The traffic laws that apply to bicycles also apply to electric scooters, and operators must abide by the usual traffic laws that bicycle operators must follow, such as speed limits, signal turns, etc. Some laws that apply to motor vehicles do not apply to, for example, electric scooters. Riders do not need safety inspections, driving licenses, registration or insurance to operate electric scooters with motors up to 750 W.
Washington
In Washington, riders can operate their electric scooters on roads, highway shoulders and alleys. Riders must not operate on sidewalks, bicycle lanes, or other public sidewalks, or on any road where the speed limit exceeds 35 mph. Riders cannot operate electric scooters in the playground or campus. Riders with disabilities who use electric scooters to improve mobility can drive the vehicle in any of the above locations, except on roads that exceed 35 mph. 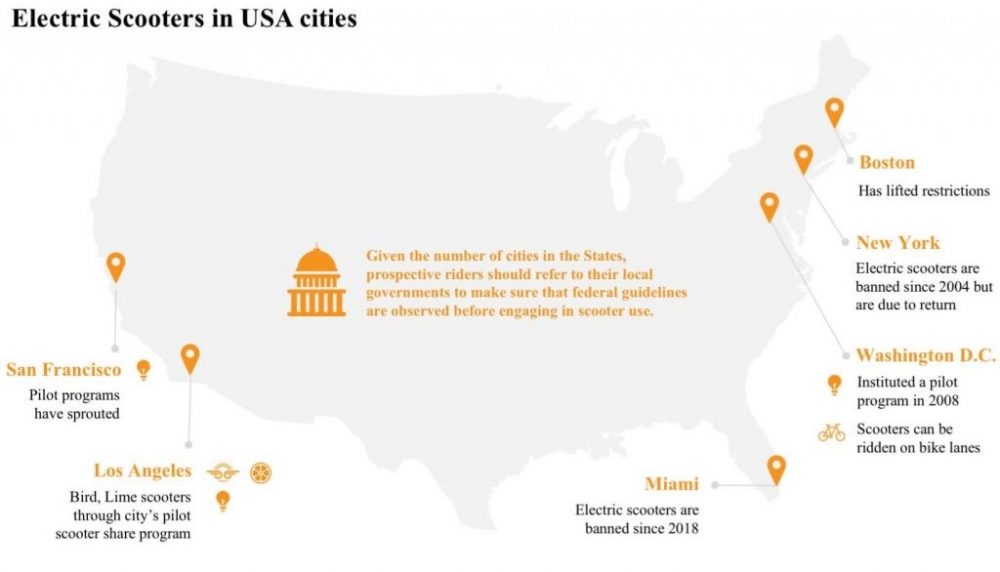 The use of electric scooters in the United States

When the United States began to debate the legality of electric scooters, it seemed that the regulation of electric scooters was supported by the 2002 federal law on the classification of electric bicycles. According to the law, if the top speed of an electric bicycle cannot exceed 20 mph and the motor power is less than 750 watts, the electric bicycle will be considered legal. If they meet or fall below these specifications, these bikes will not require their riders to obtain any type of registration. Over time, the U.S. Department of Transportation-through its National Highway Traffic Safety Administration-began to define when scooters were ineligible for motor vehicles (and subject to their standards). According to the relevant website:
The following scooters or scooter-like vehicles are not “motor vehicles” and must be manufactured in compliance with all applicable FMVSS and must be certified before they can be legally imported into the United States:
• Scooters without seats that operate in standing mode.
• A scooter with a top speed of 20 mph or higher.
• The maximum speed of an electric bicycle with operable pedals and a motor of 750 watts or less on a level paved surface, when ridden by an operator weighing 170 pounds, is powered only by such motors, Its maximum speed is less than 20 mph. 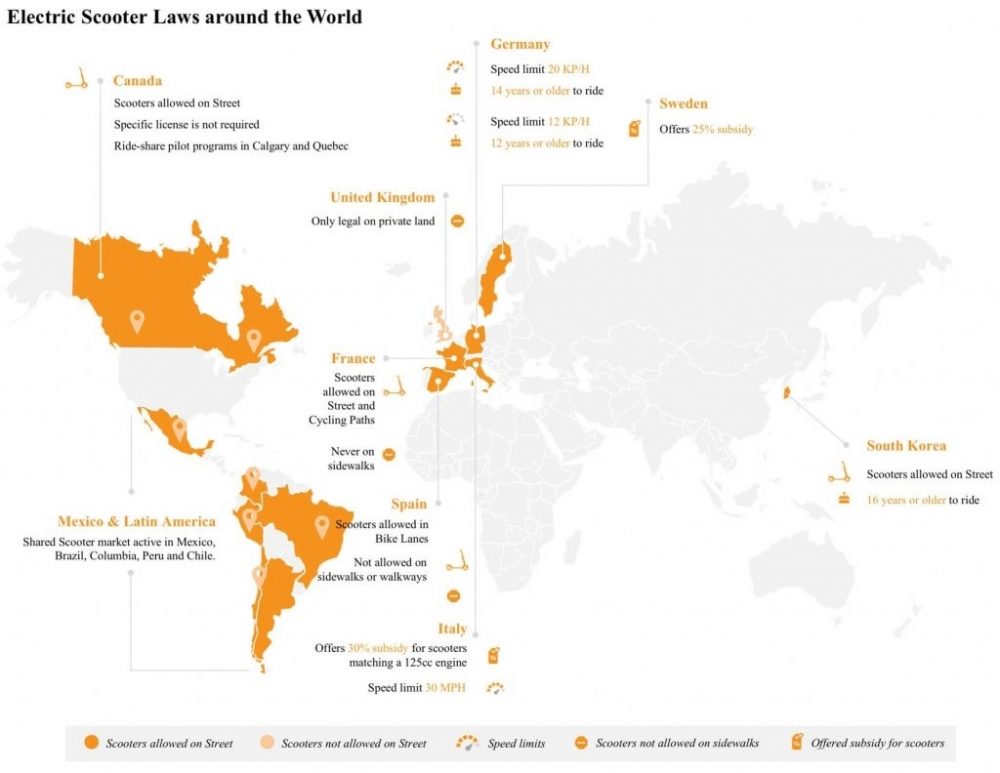 Canada
Much like the United States, the Canadian federal government treats electric scooters as power-assisted vehicles that do not require a specific license. However, the specific use of the scooter is determined at the local level. In addition, just like states, regions and cities in Canada that once opposed the use of electric scooters, Calgary and Quebec have also developed pilot programs for carpooling. Similarly, as in the United States, there seems to be a disconnect between the general use of electric scooters determined by the Canadian federal government and the acceptance of dockless scooters at the municipal level. Indicators will point out that unless otherwise banned by major Canadian cities, personal electric scooters owned are the green light.
U.K
Unlike electric bicycles, electric scooters are classified as personal light electric vehicles and can only be used legally on private land. It will be interesting to see how this regulation will change over time, and British scooter enthusiasts should consult the local government before making a purchase decision.
France
Recently, France enacted a law that allows electric scooters to ride on bicycle lanes or streets, but prohibits their use on sidewalks. This stems from the same type of complaints made by pedestrians in the United States about littering and congestion caused by scooters caused by the bike-sharing model.
Germany
German Transport Minister Andrea Scheuer passed a bill on the use of electric scooters this spring, paving the way for a cleaner and more efficient Germany. According to the bill, electric scooters with a maximum speed of 20 kilometers per hour will allow civilians 14 years of age or older to ride on bicycle lanes or lanes. Children 12 years and older are allowed to drive scooters with a maximum speed of 12 km/h on bike lanes, trails, and sidewalks.
Italy
Italian law seems to be relatively friendly to electric scooters, and even provides a 30% subsidy to buyers of electric scooters that match the performance of a 125 cc combustible engine-the maximum speed is about 30 mph-if the buyer scraps the old gas-powered skateboard Car process. The country’s capital, Rome, accepted a plan in January to prepare for the launch of dockless scooters, and it appears to be open to all electric vehicles. Again, it is best to check with the local government, but Italy is still one of the most enthusiastic supporters of electric vehicles in Europe. 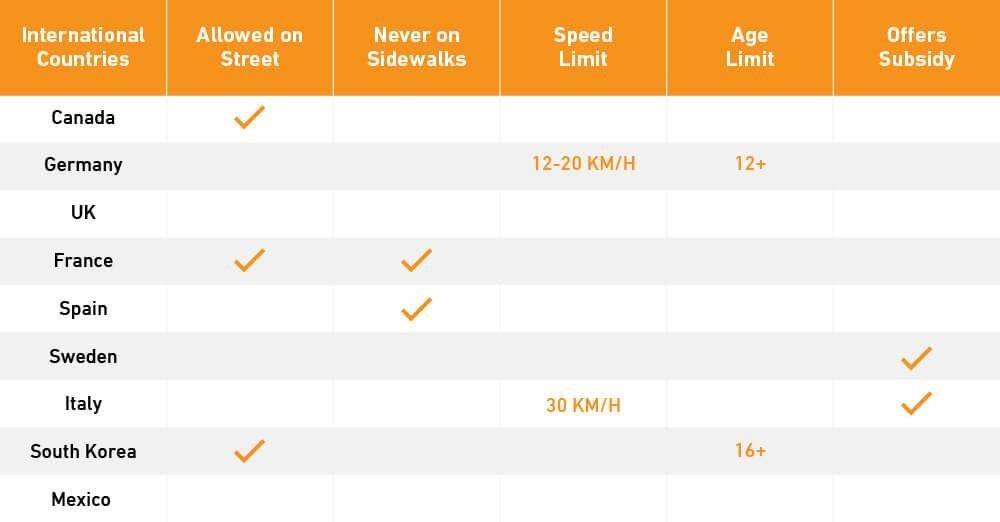 Tags：electric scooter laws legality of electric scooters
Share:
Prev： How cool is it to ride in the snow
Next： 6 Reasons We Can’t Get Enough of Fat Biking in the Snow