A man needs a little madness

A man needs a little madness 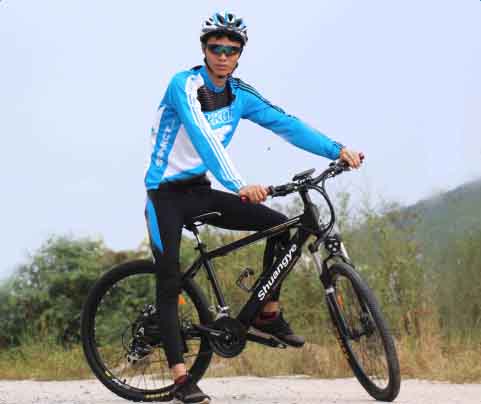 I bought an electric bike in June, 2014, after using a push bike for two years. It was supposed to be the final step allowing me to give up owning a car. I had changed my lifestyle thoroughly, so there were only two car trips a week of seven kilometres each way, which I was then able to do on the electric bike. Even so, I kept the car at home, on the grounds that I might occasionally need it, and it did no harm to the environment just sitting there. There was just the cost of registration, which would be nice to avoid.
I had owned a car for most of five years, It was a wrench to finally let go! I delayed for three years. The continuing offer to borrow a friend’s car seemed pretty solid. So finally I sold the car in August, 2015.
Friends still ask me, “Do you miss the car”. “Not for one moment”, I reply. Hey! I never have to worry about parking again, and usually I can ride right to the door. I can get to my seven kilometre destination faster than taking the bus, despite a long hill, and I can do a week’s fruit and vegetable shopping using pannier bags.
Without a car you need to be a bit more disciplined and plan more carefully. Do you really need to cart all that junk around that was so easy on the back seat of the car? You soon figure out the essentials. One new item to carry is a lightweight waterproof jacket. Ok – sometimes you get wet. It’s not the end of the world. In cold weather you need gloves and a scarf – easy in a backpack. I have always ridden in all seasons. Occasionally I have to decide just not to go somewhere, especially after dark. There’s always something else to do.
I live walking distance from my electric bike supplier, which is very handy for servicing. I also decided to buy from a business that specialised in electric bikes only, rather than from a regular bike shop that sold the occasional ebike. I think that was a good decision.
I think electric bike suitable young pepople and the older,for young pepople,travel and sports are impotant, Have a e-bike, do what you want to do.
What’s more,It is a lot easier for a retired old person, to let go of the car and rely on bicycles and buses. let them has more time and less money. I greatly sympathise with families with young children, or older children! They are so busy and pressed for time, a car is hugely convenient. There’s a role for oldies to become leaders here.
My entire motivation has been around climate change and the environment. At first I was mildly irritated when people said, “Oh! Of course… You are doing this for your health”. No – I am doing it for the health of the planet, and I’m also glad there’s a side benefit to my health. I still use a push bike for most short journeys, and that is indeed partly for the health and exercise benefits.
I appreciate, from experience, that it takes a long time to thoroughly downsize and reduce one’s ecological footprint, in more aspects than transport, without feeling diminished or deprived. It takes years. So start now! Slow change is easy change.